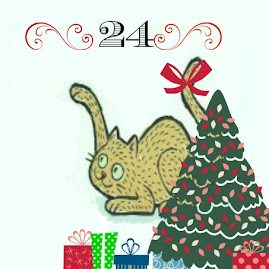 As you know, here in Germany we start celebrating in the evening on Christmas Eve which is a big relief for the children as it means that they also get their gifts then.
In the advent calendars I have done before I usually took a break on this day (and gave you one ;-)), but today I want to tell you about a tradition that has started in 1747 in Germany where it is not commonly known while it gained popularity in the UK in 1968 - the Christingle. No worries, I'll explain what I mean.

Opinions differ about where the word has come from, but the history is quite clear. In 1747, a minister of the Moravian Church, Johannes de Watteville, gave each child a beeswax candle with a red ribbon at the Christmas service to make them think about Jesus as the light of the world. The tradition of the candle, for example with a red ruff or green embellishment, lives on in the church, not just given to the children anymore, but also the grownups. Outside of the church, the tradition is not known in this way in Germany, as far as I know.

In Britain, however, the tradition changed with the first Church of England Christingle service in Lincoln Cathedral in 1968 where Christingles in a new form were used to raise funds for The Children's Society. By now, thousands of Christingle services are held in mostly British churches each year (in Germany for example as German-British services).

This is how the Christingle looks there - a cross is cut into the top of an orange symbolizing the world, the red ribbon around the orange is for the blood of Jesus, a candle representing Jesus as the light of the world is stuck inside (often with some tin foil to hold it better and to catch the wax), the cocktail sticks on four sides stand for the four seasons or the four corners of the world, the sweets for God's creations.

To me it's a rather unusual tradition (especially the sweets), but it's also quite fascinating to see how a tradition can come to life and change over time.
And it's still changing. Some people add cloves for the scent which of course reminds of orange pomanders. Also for safety reasons, some churches use glowsticks now or it has been suggested to use battery-operated candles, just like for the Lucia crown.
What's your first impression of the Christingle?

For further reading:
Clare Spencer: Christingle: The tradition that only got going in the 1960s (BBC Magazine Monitor)
What is Christingle? (on Twinkl)
James Cooper: The history of Christingles (on the site Why Christmas)