No quote of the week or By the way.

I want to apologize if things don't go normal the next few weeks, maybe even months. I know you wonder why I use the word "normal" at all.
What I mean is that I can't promise regular blog posts. Not even the quotes of the week because most of my DVDs are in big boxes at the moment. You can see there is none today and I can already say there also won't be any finds of the week tomorrow.
Life isn't easy for me these days and I don't always have control of how and when things happen. Please bear with me and my swinging moods ;-)

And as none of my posts is complete without a picture, I'll show you one of a cuff you don't know. Actually I can't believe I haven't shown it to you already because I have to admit I was pretty proud of the idea. 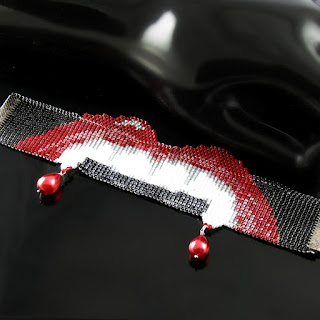 Email ThisBlogThis!Share to TwitterShare to FacebookShare to Pinterest
Labels: bead looming, blood, by the way, cuffs, fangs, no quote of the week, vampire

Let me tell you how I spent my day even if Meffi thinks it's terribly embarrassing and contemplates moving in with someone more decent. 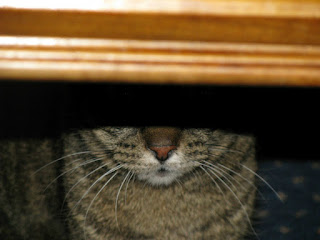 I got up, I packed up stuff, I ate and drank something, I talked on the phone, I loomed, I did laundry and then ... let me try to bring some order into the story ... and try to blind out the vuvuzela people outside *eyeroll*

I said I loomed. That's true, but after I was almost done I ran out of beads and took it as a sign to change the design slightly. I felt a strange relief and satisfaction cutting up the middle part.
After ripping up the cuff, I continued with the laundry. I gathered the towels from the different rooms and because sometimes I tend to get distracted easily I decided to unload and reload the dishwasher first. Then there were the empty cat food containers that I had rinsed out to make them ready for the recycling bag (in this area we have yellow bags). The bag was almost full, so I tied it up and went to put it out in the hallway.
Maybe I should mention that I like to dress very casual at home, meaning I wore a long t-shirt and was barefoot, after all I didn't plan any longer trips.
I put the bag out through the door and it fell right into the middle of the hallway. Holding the door knob tightly I bent down to pick it back up, my hand slipped off the knob (don't ask, I have no idea why) and there I stood in the hallway and heard a soft click from the door. Let me remind you again that I was wearing a t-shirt and not much more. So I went downstairs to the neighbors to call my family and let them know I needed a key. Four neighbors and none of them in. I'll have to remember to tell them how disappointed I was in them.

After hitting my head on the wall a few times which unfortunately didn't change anything about the situation I tried to think of the best solution. It was absolutely impossible for me to go outside without having masses of people chasing me with pitchforks and torches after a short while. I had no idea how long my neighbors would be gone, I mean they could have spent all day somewhere else. So the best shot was to hang out of the window (that doesn't open all the way) and yell at some unsuspecting stranger hoping he or she would carry a cell phone.
Our street is pretty quiet. Amazingly quiet for a Saturday afternoon. It took more than 20 minutes in which I was freezing my feet and my tuchus off (our hallway is nice and cool even when it is hot outside) until a gentleman walked by on my side of the street. The window I looked out of goes out to the neighbor's parking spot, so you can only see a very small part of the street.

I yelled at him "Sorry, could you please help me and do me a favor?" He walked to the window giving me a strange look for absolutely no reason at all. It's not that unusual to be yelled at by a lady with a bad hair day. I asked him if he carried a cell phone because I had locked myself out and was not in the gear to be seen on the street and really needed to call my family. He smiled, reached up and gave me his phone.

I called my mother who of course wanted to know details when all I wanted was a key. She asked me why I waited for 20 minutes before calling. Of course usually I don't carry a key when I get stuck in the hallway, unplanned, wearing almost nothing (sorry for the image, but really, it was a big shirt, just not suitable for outside), but always a cell phone. She thought. Obviously. I told her that I was on someone else's phone and that I needed a key. Now!

I gave the phone back to the nice gentleman (I hope he had some success telling that story at home) and told him that he saved me and how grateful I was. He winked at me saying that things like that happen. Yeah, right, but why to me?

10 to 15 minutes later my sister arrived and said with a grin what a good thing it was the neighbors had books out in the hallway (reminder for myself ... do NOT try to read that one book again, boy, it was boring).
Another reminder to myself ... if you are not smart enough to carry your key, at least take beads and wire with you and deposit a pair of pliers in the hallway, so you can entertain yourself in some useful way.
Wanna know something funny? The last 20 times I put something out in the hallway I always carried a key and the door never got shut. I wonder if the snickering behind the door was just in my head. Was it in my head, Ponder? Was it?
Eingestellt von Cat um 11:41 PM 4 comments:

"Huckleberry came and went, at his own free will. He slept on doorsteps in fine weather and in empty hogsheads in wet; he did not have to go to school or to church, or call any being master or obey anybody; he could go fishing or swimming when and where he chose, and stay as long as it suited him."

Of course I'm talking about Huckleberry Finn. He's the boy who can do as he pleases, has all freedom that we are secretly jealous of, on the other hand I doubt any of us would like to sleep on doorsteps or in hogsheads.

Meet Huckleberry Ted.
He just caught a fish and I hope for him he'll go home now showing it off.
Ted is made from a lampwork bead by Dzign by Jamie, his clothes, a shirt, pants with a pair of suspenders and his hat are crocheted from colored copper wire as is his fish.
I'm a little behind on listing, but hope he'll make it into the shop in the next few days.

For my crafty friends

When I just packed up stuff, I came across this cartoon I had saved from a day-to-day calendar.
I wonder why.
Any idea? ;-) 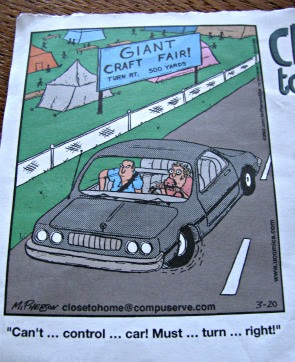 I want to thank my sister for introducing me to this series. I am one of those people with a TV set who "only" have about 30 channels. Of which about eight or nine can be watched at all, at least sometimes, because the rest is made up of soaps, reality shows (yeah, some reality), talkshows and whatever. I'm not judging anyone who likes to watch that stuff, I don't want to be judged for watching cartoons, so that's just a personal opinion.
The series is running on one of the channels I don't get. As far as I know it's new here although the first season aired in the USA in 2009. Better late than never, though.

This family is, well, unbelievable. There are Jay and his beautiful, much younger second wife Gloria who is from Colombia (and has a great accent) - and her son Manny who is 11, but behaves like a grown up (my favorite must be the burgundy dinner jacket). There is Jay's daughter Claire with her husband Phil who has never really grown up, and her children Haley (one of the popular kids), Alex (the smart girl on the brink to teenagehood) and Luke (who's a lot like his father). And there is Mitchell, Jay's gay son, who just adopted a Vietnamese girl, Lily (I adore the way she looks at everyone), together with his partner Cameron.
And because they are that unbelievable it was extremely hard to pick a quote. This is just one of the many, many that made me laugh out loud. I'm sure it won't be the last one I'll feature.

Jay has a successful business. One day Gloria and Manny visit him at work and one of Jay's employees let's Manny drive the forklift. Right through the wall. 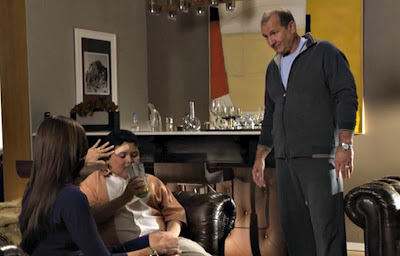 Manny: Mom, I'm fine. The hospital said I could go back to school.
Gloria: No. You suffered a traumatic experience.
Manny: I barely remember it. I remember crashing through the wall ... and the ambulance ride to the hospital.
Jay: That wasn't an ambulance. I drove you.
Manny: Then what was that siren?
Jay: That was your mother.
Gloria: I was not that loud.
Jay: Cars pulled over, honey.

P.S. I never thought I would like Ed O'Neill that much.
Eingestellt von Cat um 9:22 AM 2 comments:

Email ThisBlogThis!Share to TwitterShare to FacebookShare to Pinterest
Labels: quote of the week, TV series

1. Chai.
You know I wouldn't do a Saturday post without chai. The flavor of the day is Power Chai, stronger than the last one I had which was very creamy and mild. So if you feel I come across powerful, I'm sure it's because of the chai.

2. One Hit Wonders.
It's amazing what you find when you clean out closets. I would swear anything it wasn't me who put those 2 CDs in there, but who cares?
Right now I'm listening to this song which is from the same year I am. A great vintage if you ask me. Come on, ask me!

I remember buying this collection for just one song that I couldn't find anywhere else. AOL radio (oh yes, you got that right, AOL, and I loved my Oldie channel), thank you for that.

3. Broken earwires.
Yes, I managed to break the end off a marquise earwire. And it led to this. Because that's the way I roll. If life gives you lemonade, you ... eh ... put it in an amphora. Or something like that. You get the idea. 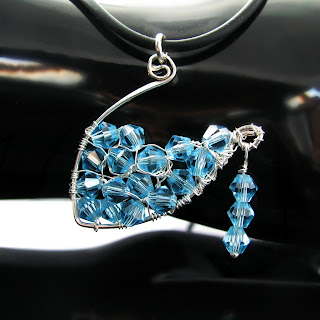 4. How to break an earwire.
It happened when I made these earrings. I have to tell you I'm pretty much in love with them. I might have to make more in that style, what do you think? 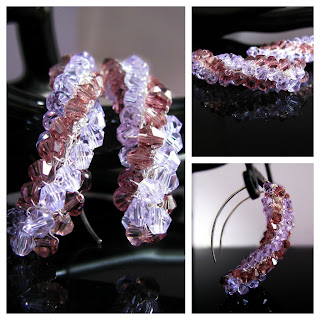