The last time I had expressed the hope that I would be ready to show something new soon, based on one of the designs I had shared.
For this I used some beads that I have probably had around almost from the start of my jewelry making. It was at a Sunday market in a small town nearby where I found a strand of blue goldstone. Back then, I had only seen red goldstone before, and I really loved that deep blue. If only I had known that these beads would haunt me for years, I am almost sure that these haven't been the last ones because they have been hiding in old pieces that I set aside for ripping up before.
My problem was that I never had a really good idea for them.
I finally found a good use for them, though, even if it meant that I was shamelessly hiding that beautiful blue in the process.

They are perfect to incorporate them in these beaded buds, and as I had three of them, I decided against another pair of earrings and instead made this necklace
With the necklace, I'm also once again embracing my asymmetric side which doesn't happen that often, both with the position of the buds and with the different colors.
Originally, the third bud was supposed to be bronze colored, but I didn't have the necessary size 15 seed beads for that, and I simply couldn't wait for an order because I was afraid the necklace would end up in the infamous WIP drawer.
Now I'm thinking the gunmetal makes for a very nice contrast, too. What do you think? 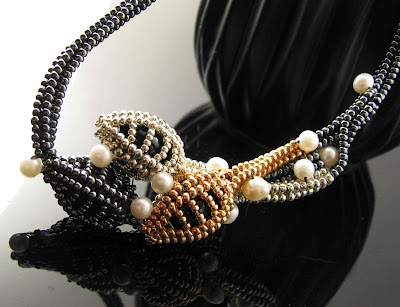 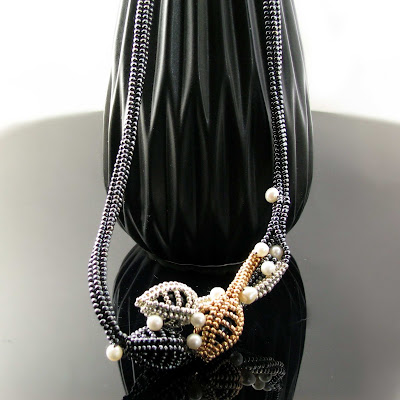 I admit that the year is already feeling rather used AND it is definitely trying to show 2021 that it can do even "better" than its predecessor.
In short, I am still struggling with life as I had mentioned before in December. Private matters, but also what is going in the world, often I just want to hide under my blanket in bed. It's exhausting, it's scary, and sometimes it's hard for me to find the motivation for the smallest things.

Just now I managed to cut up cardboard boxes again and it was pretty amazing to see that most of the boxes were for the cats and just two small ones for me, something for the household (yay?) and a gift. So spoilt, but what would I do without them?
Now that der Dekan has become a tiny bit calmer - as in being crazy in segments rather than for five hours in a row - I even had the chance to get a little creative again.
I participated in an Art Nouveau inspired showcase on Facebook and was determined to make some new items and to use some of my old stash. It took me a while to get into the flow of creating and reach that meditative state, actually one of the designs needed experimenting and cost me some nerves before it finally worked the way I wanted it to, but then it felt so good.

I am sure I have mentioned before that I don't like making earrings, sometimes simply because I forget how I made the first one, but bead embroidery has helped me a lot with that. It's more work for me with having to sew on the backing, but it is really satisfying to end up with two matching earrings!

So here are the pieces I have made so far in 2022, and I'm working on something else based on one of these designs to use up some leftover beads, so hopefully there will be something new to show again soon. 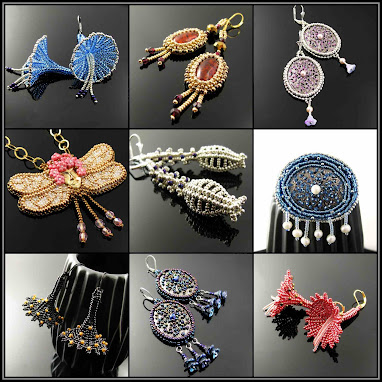 Stay safe and healthy out there and take care!

By the way, I have finally caved and can now also be found on Instagram where I don't just share my work, but also brat ... sorry, cat pictures and items from my personal collections.
Eingestellt von Cat um 9:00 AM 4 comments: