I'm still here although I took a longer break due to personal reasons. I haven't been lazy, but you will see more about that in December for a new advent calendar of mine.

The wire had become a pretty rare guest in my creative world lately, but the other day I was determined to step away from the beads and bring the wire back. As usual I didn't have a plan, all I had were four short strands of thicker wire and my working wire.
Let me tell you about the journey I took with them which led me to a peculiar creature.

It's strange how four strands of wire can be "bound" together with more wire, and then you look at them and you start seeing something - if you are lucky, that is, and your muse is playing along. As the length really wasn't enough for big experiments, it was only natural to bend the component or whatever you would have called it at that moment in the center.
One thing I saw was a little octopus like one I had made before. It was good to know I would have a plan B, even if I didn't have a plan A. I'm saying plan B because I didn't really want to make an octopus. I wanted to make .... an eye ... an eye with feathers ... did I have a cab I could use ... the faux amber, perfect size ... and the feathers on the end (please note that none of the steps went as quickly as described in this post, I held stuff up a lot and looked at it and put one thing on the other, unwove (is that even a word?) wire and so on, and never took one picture of the process because I couldn't disturb the muse, right?) ... and now I had an eye and the "amber" kept moving a little, so I had to get the wires in the back tighter ... shining through the cab now, not sure I like that, but I'll leave it for now ... next the feathers?

No worries, I won't go on like that, but I wanted to show that this is pretty much how the process of creating often works for me.
Before the feathers my eye fell on an agate slice. THE agate slice. I got it in an early Easter sale, shortly before the pandemic made me stay home. Don't ask what agates have to do with Easter, the hardware store kept them in a basket at the table with decorative items on sale. This particular slice had been out of the stash drawer several times, but had always refused talking to me. This time, however, it said "look at me, I'm a mouse". An eye with feathers and a green mouse. Weird. Leaves instead of feathers. Leaves, woods, a green mouse ... a fairy mouse!

That's when it all came together. My mouse needed a big ear, swirls and scrolls on her body, a long tail with swirls and even swirly whiskers.
When I finally held it against the light, I noticed that especially the lower wire behind the cab seemed to add more dimension and life to the eye. 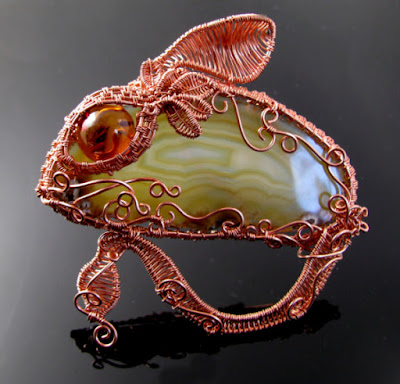 It really is an odd little creature, but aren't we all? ;-)
Now it just needs a bail and/or chain if I decide to make it a pendant. It's not a lightweight. Maybe it would look nice in a shadow box with some kind of woodsy background?
Eingestellt von Cat um 9:00 AM 6 comments: