One week later and Jessica has finally chosen the outfit to go with her bead embroidered overnight bag.
She wanted it to be fashionable yet comfortable, classic but not boring.

The white sweater is a moderate A-line and has a turtleneck that isn't folded over, but covers the neck completely. The edge is a decorative, lacy look.
The short sleeves are woven differently to add interest.

Jessica loves wearing long and bold necklaces over her sweater. Here she chose a copper tone Y necklace with a crystal and a huge (from her point of view) freshwater pearl. The brown and white tones go so well with her outfit and the accessories! 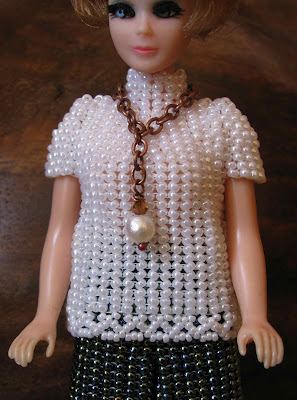 To add a bit of color to her outfit, Jessica grabbed her slim scarf made from a multicolor mix. Just a touch of yellow makes the sun come out, she says.
She can wear it like this, but also as a head scarf. 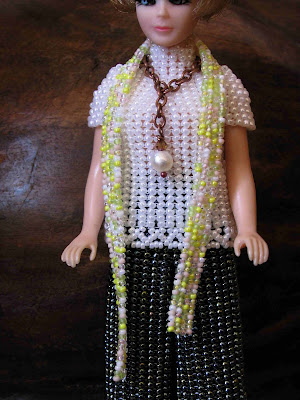 Among her favorite pants are these woven palazzo pants. They are wide and comfortable and even if they look blue at first sight, they also have that beautiful gold tone mixed in that you see if you take a closer look. It's one of Jessica's favorite colors (and mine ;-)).
She thought about wearing boots with them, but in the end she decided to wear her brown slippers after all. You never know how much you have to walk when going sightseeing. 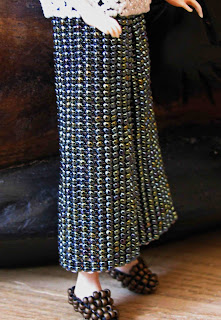 Now the whole outfit in one picture ... Jessica looks quite happy with it, don't you think? 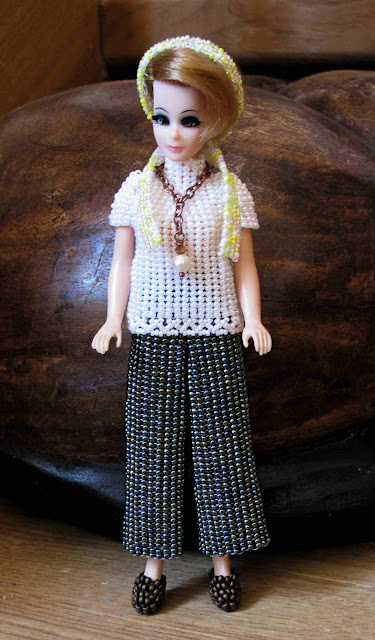 Oops, can't forget the bag. All of her important stuff is in there, she said, although she refused to show me what exactly she was taking.
I have the suspicion that she raided my snack shelf for her trip, and that bag is looking heavy! She better bring some souvenirs home for me :-) 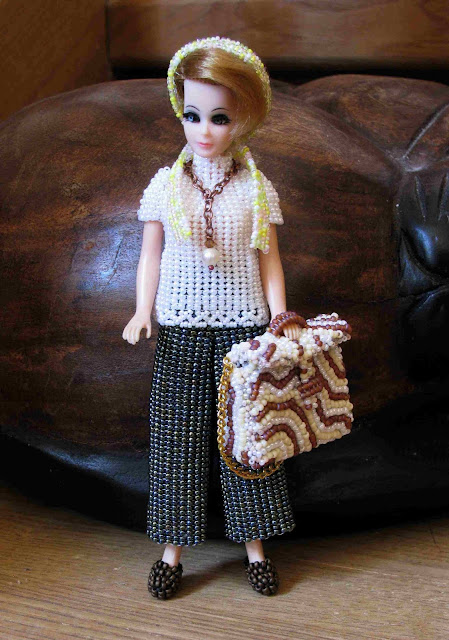 Jessica was a registered trademark of the Topper Company. I am not affiliated with Topper in any way.

Usually things go the other way round. I make a doll outfit and then I make accessories going with it. I guess this time it won't work like that, but it hasn't been planned that way.

In fact I am working on a Barbie doll outfit at the moment, on the top, to be precise. In the middle of this project, however, I ran out of one bead color. No problem, who doesn't like a bead order? I like to optimize my bead orders, though, so I'm still listing what exactly to get.
In the meanwhile I started on a new idea, a bead embroidered handbag for Barbie. I have made bags on the bead loom and in brick stitch and peyote before, but I wanted this one to be sturdier, with a lining, one that she didn't get from the department store, but from a bag store. It's really kind of funny because I would never think of going to such a store myself, all I need is my trusted kitten tote.
Just so you know, Barbie didn't like her new handbag and I get why. It quickly became clear after I started beading that it wouldn't work with her outfit in colors and style, so she's going to get something different eventually.

My plan was not to make this bag flat like the totes I had made before because I wanted to put something (whatever that was going to be) inside.
I started by cutting out the backing for the beads, a large rectangle marked with smaller ones for the front, the back, and the flap, with smaller pieces for the sides of the bag. I would bead the surface, sew on Ultrasuede for the lining, and then fold everything up and close the seams.
It sounds easier than it turned out to be. While my measurements weren't wrong, I hadn't calculated how much thicker the beads and the Ultrasuede would make my piece which made it harder to fold up and sew together right. For example, I would have wanted the flap to be a bit longer which it would have been on a flatter piece.
I wanted a kind of button or hook sewn to the front to go through a hole in the flap to close the bag, but because the flap wasn't as long as planned, I had to settle for the strap instead.

There were a few more things I learned while sewing up the seams, so if I'll ever make another one, I'll know what to pay attention to beforehand.
I'm still very happy with the result, though, I just wish it hadn't taken me so much longer than I had expected. Not that that doesn't happen to me all the time, thinking about it ;-)
I have already been contemplating other ways to make miniature bags. 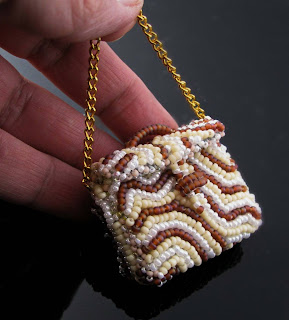 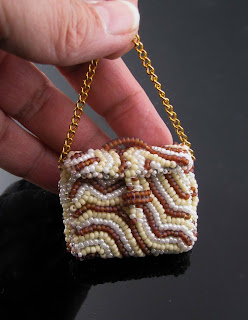 As Barbie has decided not to use this bag, Jessica has taken a look. She said she needed an overnight bag and thinks it will work nicely. She tested it with a short dress and a blouse. And now she wants an outfit going with this.
Putting my thinking cap on in 3 ... 2 ... 1 ... 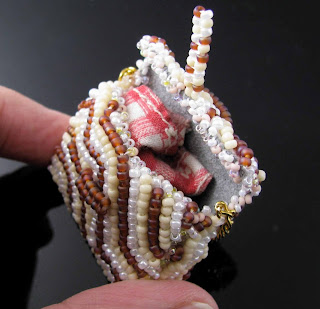 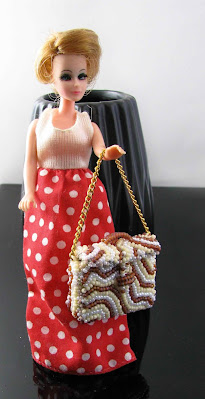 This week's Jewelry Artisans Community Oldies but Goodies Challenge was about Easter ... white and colorful "eggs", pastels, flowers. I hope you'll like my little collection.
And can someone take those chocolate eggs away from me now, please? ;-) 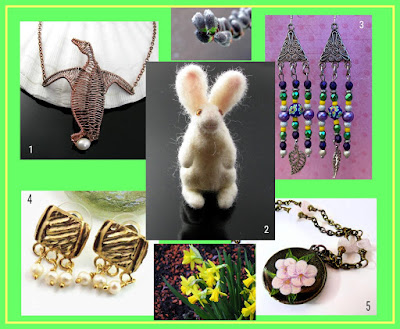 Spring is definitely around the corner in our hemisphere.
To celebrate this, the topic for this Jewelry Artisans Community Oldies but Goodies Challenge is inspired by the blooming that has been going on all around us.
My plan had been to take some pictures in our little garden to complement this post, but it's cold out there and I just can't bring up the motivation right now.
Instead I will be giving you these beautiful blossoms that our members shared to get you into the right mood! 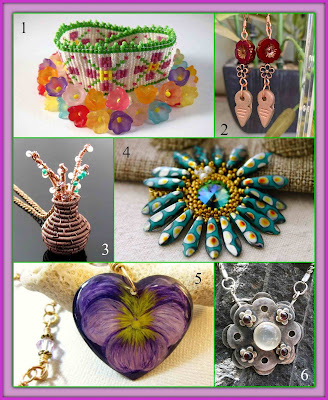