The "Göppinger Maientag" was first celebrated in my hometown on August 11, 1650 ("Maien" doesn't refer to May, it is an old word for green twigs carried through town by children and young people) to give thanks for the end of the Thirty Years' War and has since taken place every year, with some exceptions due to war, extreme rain (if possible, it had been postponed in case of rain), and the Covid pandemic.
Of course the fest has changed over those many years.

In 1955, the mayor Dr. Herbert König suggested to add a historical part with scenes from the town's history to the pageant which is still a favorite today, spots for participation have always been in great demand.
I'm still feel a small sting of disappointment when I think of the year that I could have taken part, but glasses were forbidden and I wouldn't have come far without mine. The year after, glasses were allowed again, figures.

The schools have own costumes for the lower classes, for example inspired by fairy tales.
Higher classes were also allowed to create their own scenes which could be funny, but there were also statements on topics like politics, pollution, and more.

No pageant without marching bands (not only from our town), but different clubs participate as well.

Here's an all time favorite of mine from the historical part, a merchant's wagon inspired by one around 1430. I'm not much of a horse person except from a distance, but I love these! 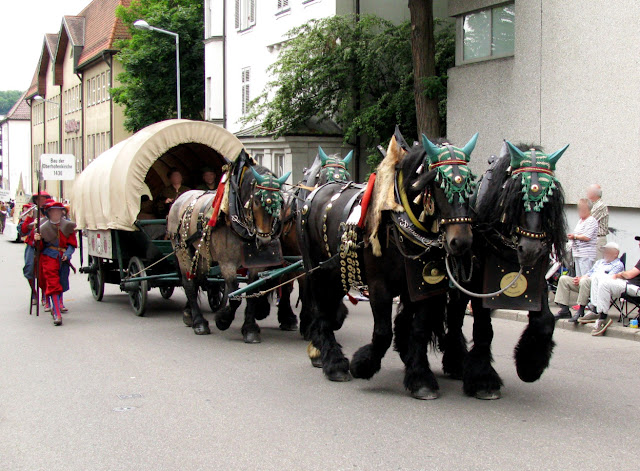 In my elementary school, the costumes for the girls in the classes 1 to 4 were Little Red Riding Hood, Snowflake (referring to the old Mother Holle fairy tale), Goldmarie (the hard-working girl from the Mother Holle fairy tale who got showered with gold as a reward), and .... well, none of us three sisters can remember what the fourth was, but I'm still researching.
It's hard to believe there were only three, but why doesn't remember any of us?
As much as I don't like pictures of myself, I still wish I could have shown you one in a fairy tale costume because they were and are really cute. I remember feeling great as Little Red Riding Hood, with all the enthusiasm only a first grader can have.
I also stick to the story that I was adorable, unfortunately I can't prove it because no pictures of me on Maientag exist.


In 1949, the former mayor Alfred Schwab had the idea for a special badge. The first one showing the coat of arms was from glass and only one inch, the ones after that were about 1 1/2 inch, mostly from wood, and came in different colors which were natural wood, yellow, blue, red, and green in the later years, before that there were other colors, too.
Designs are chosen via a contest for school children (which explains the not that imaginative selection with recurring themes, but that's just my personal opinion).

I have them all from 1981 on and three before that. Older badges are hard to find. According to Göppingen's homepage 2,500 badges are made, but it doesn't say if this was from the start. I guess a lot were thrown away eventually, others may hide in drawers and cupboards.
Of course I will update the page if I get new ones. 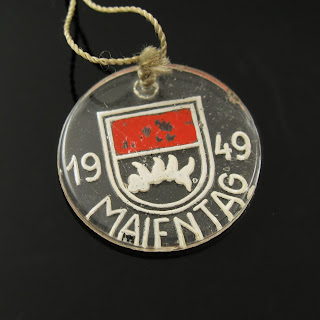 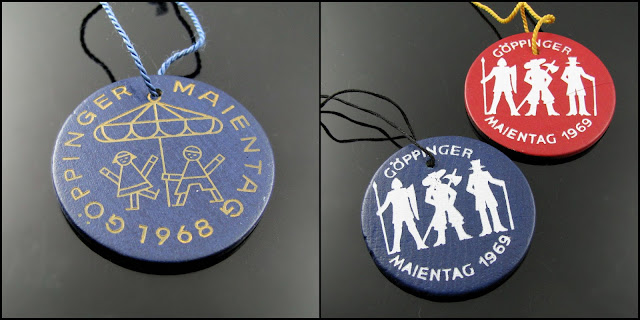 1970 - a May bug
1979 - a special badge in a different shape, that of the coat of arms that is also depicted, it celebrates the 825th anniversary of the town and the 900th anniversary of the duchy. I don't know if the castle shown is supposed to stand for the old castle of Hohenstaufen 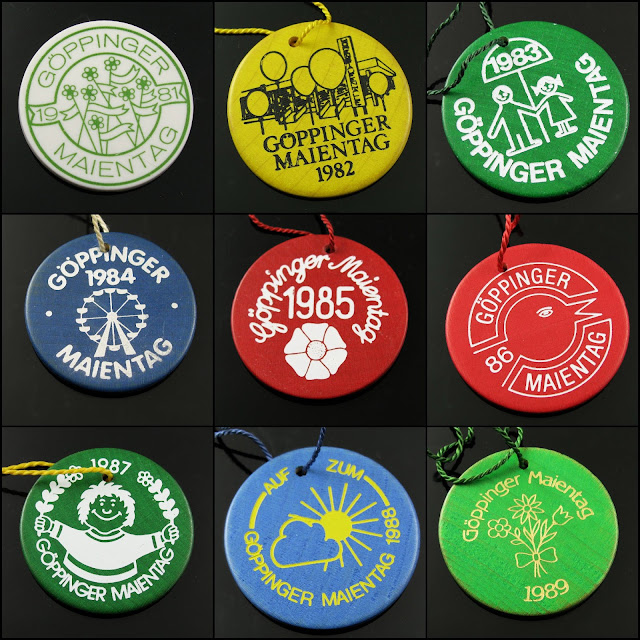 1981 - flowers with flying banners ... this was the year they didn't have a wooden badge on a string, but a plastic one as a pin. People were not happy at all, so from the next year on badges were made from wood again!
1982 - the Hohenstaufenhalle (EWS-Arena since 2008) with balloons in front, in this indoor sports arena you could see performances by local sports clubs while having coffee and cake
1983 - children holding hands
1984 - the Ferris wheel
1985 - a flower
1986 - a bird
1987 - a smiling person holding flowers
1988 - the sun peeking out from behind a cloud
1989 - a bunch of flowers 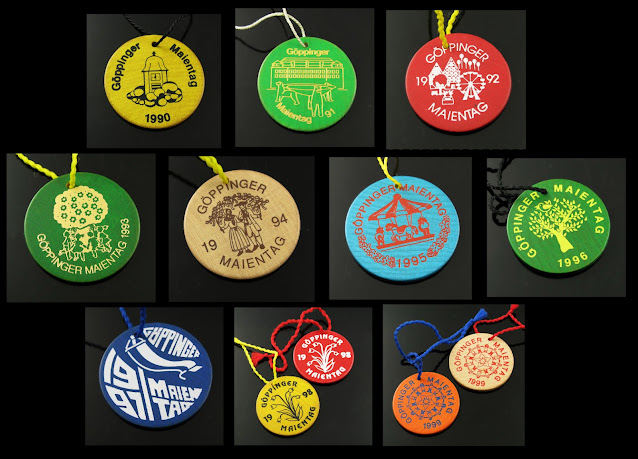 1990 - no idea if this refers to an actual church steeple as the ones that I know in town don't have such a rounded roof
1991 - this is the Renaissance castle in Göppingen which was built from 1550 to 1568 under Christoph, Duke of Württemberg who liked to come into town to drink the acidulous mineral water, in front there's the Staufer Fountain (named after the Hohenstaufen dynasty whose most famous member was probably Barbarossa)
1992 - there are several things shown here, such as the Storchen (the oldest residential house in town built around 1536, it hosts the City Museum today), but also elements of the fair held for three days, with a balloon competition and the Ferris wheel
1993 - children dancing around a blooming tree
1994 - couple in traditional garb under a bow of "Maien" (see above)
1995 - children's Merry-go-round
1996 - bird in a tree
1997 - the town's flag without the coat of arms, they hang outside town hall during the "Maientag"
1998 - lilies of the valley which are called "Maiglöckchen" = "May bells" in German, so this is possibly a reference to the word "Maientag" which doesn't have to do with May, though
1999 - a very popular motif for the badges, children holding hands, in this case in a ring around a flower 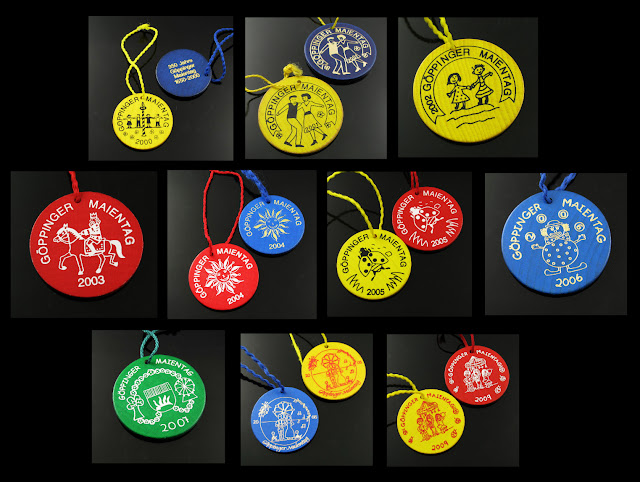 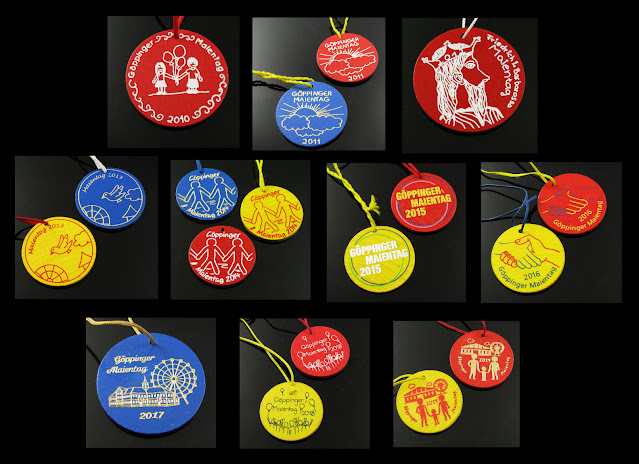 2020 - a tree and once again the Ferris wheel
2021 - town hall
2022 - a ring of children (not holding hands this time ;-)) around the "drei Kaiserberge" = "three Emperor Mountains", a name for the Hohenstaufen, Rechberg, and Stuifen