Sometimes it really sucks to get old/er. I've had health issues all my life and always think I should be used to it by now. Guess what - I'm not.
It started out with foot pain which then led to my back going out because I couldn't walk right. It's not as if I haven't felt old sometimes before, but you should have seen me these last few weeks. Once one spot was fine, the next one began hurting and I'm not completely through with this yet.
The worst part about it was that it took away all my motivation to even try doing anything fun, like being creative, as all I did was worrying about how to best care for the cats (luckily I had some help from the family) and not crash when der Dekan tried to hunt my old 2 DM fleamarket cane while I did my best to slowly make it to the kitchen, for example.
I was so sure that both he and I would be dying in an earth shattering fall, him because I would fall on top of him! ;-) Strangely enough, we both made it alive. Gundel was smart enough to stay out of it completely.

About a week ago then, I have started working on a new Dawn doll and it felt so good to feel my creative flow coming back.
Two days ago, however, I suddenly felt the urge to make a piece of jewelry. I think it has been before Easter that I last made something, definitely too long!
Going through my cab drawer, I found a rock that I have had for years and years. I even had turned it into a pendant once before, but was never completely happy with that.
I probably bought it as a worry stone back then because it's really smooth.
The last time I had used either brass or bronze wire - it was ten years ago, I only remember how hard it was on my hands - and dark red Swarovski bicones for a wire crochet bezel, and I stuck with the color combo of gold and red for this bead embroidery pendant.

I still love the mystery rock, even if I have no idea what kind of stone it is. What do you think? 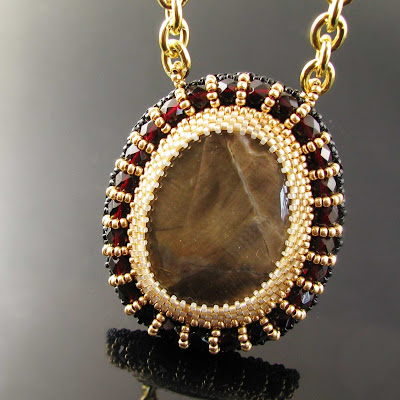 Usually I need a break after completing a doll outfit. I take a while relishing the feeling and admiring my own work - yes, I know that doesn't sound very humble, but it mostly is a very interesting path from the first row of beads to the completed doll and I'm always amazed myself that it has actually happened!
This time my bead mojo was strong enough for me to start on a new doll only a few days after finishing the wedding outfit and once again there were experiments, failures, and a complete change of plan.
You see, my first plan had been pink, but I had problems getting the same pink in both size 11 and 15 seed beads, so I checked the colors I had on hand and went for a favorite opaque luster red instead.
Luckily red with some golden accents looks stunning on this girl with her long blond hair and luckily she's not as afraid of color as I often seem to be myself or this dress would be black now ;-)

My second plan had been a kind of evening gown which I'm not going to say more about in case I'll do a variation of it eventually after all (how often have I said that about things?). The reason I didn't follow that plan were the gloves.
Did you know that Dawn has really small hands? Bead gloves simply looked too bulky, even with 15s, and of course there wasn't a chance I could have made a thumb with beads.
So the gloves turned into sleeves instead, 3/4 long which is a preferred length of my own.
When I was still a knitter, I hated sleeves. It was my old problem of having to make the same thing twice, boooooring. This time I made the sleeves first, that's definitely a new one for me.

What I really like about making these doll outfits is how one thing influences the other, often unexpectedly. After the sleeves I made the top and when I was at the top of the top - I often start from the waist because the beads don't try to run away there - and joined it with the sleeves, it hit me. A Carmen neckline!
And the Carmen neckline called for a wider, flowing skirt.
You may think at first that this dress doesn't look that different from that of the Fairy Queen, but actually there are several things I did like this for the first time.
There's the neckline and my first long sleeves, there are tiny crystal embellishments (you have to trust me on this, it's hard to see here), and not only is the waist a bit higher up which accentuates Dawn's lovely figure, but the skirt also flares out higher up, and after increasing always in the same spots for some rows, the skirt then falls down straight while the Fairy Queen's skirt is increased all around and all the way down to the bottom.
That's the fun about making these dresses, even though you are limited by the beads not being flexible, you can still play with designs.
I think Dawn likes it, too, judging from the way she's showing off her new dress. 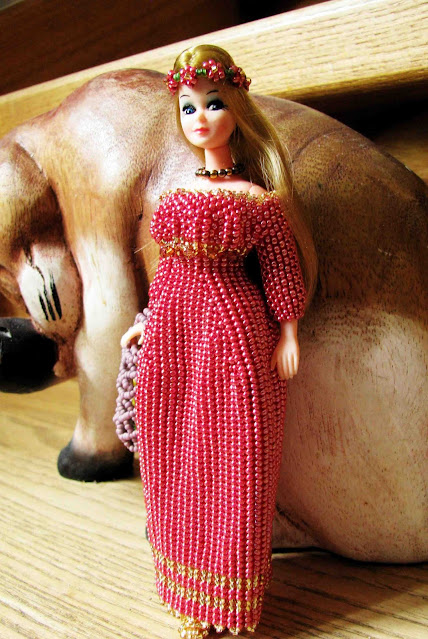 The dress didn't seem to need many accessories, so Dawn is just wearing some simple gold sandals - I'm sure she would also have liked to go barefoot - a classic two-toned coated hematite ball chain and a cute little daisy chain. Maybe she has just made that herself before going to the market?
Yes, she has been to the market with her netted cotton tote that she has also made herself, no doubt, and she has brought home a huge ear of corn which actually fills up the tote. Hopefully it's organic, but I'm sure Dawn knows what she does! ;-) 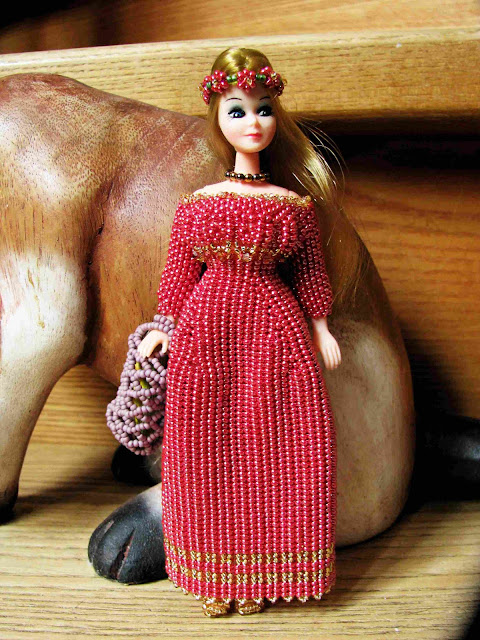 I already have at least two new designs in mind, one of them will take more planning because of the technique I think I'll have to use, however, so I can't promise when there will be more to see.

Dawn was a registered trademark of the Topper Company. I am not affiliated with Topper in any way.
Eingestellt von Cat um 9:00 AM No comments: