No, they are not a couple even if the title makes it sound like that ;-) Although you never know if they have met under a full moon, SilhouetteCat sitting at the pier maybe, looking down on his friend who has come from the depth of the ocean to say hello? I wonder what kind of conversation they would have.

Let's start with SilhouetteCat.
If you have followed me for a while, you may know that he is one of my favorite HeatherCats and I have made several versions of him.
This one is my second bead embroidered version and the first one in color, all because I couldn't resist turning a shimmering checkerboard cab into a moon.
I hadn't planned a HeatherCat. My first thought had been a tree "holding" the full moon, but luckily I used a big piece of backing as if Mabel, my muse, had been whispering in my ear that a moon needs a cat ...
Once I had beaded the bezel for the moon and added some rows around it, I knew that it reminded me of Heather's SilhouetteCat.

So I added the black cat -  with the body changed a little because I didn't want him to reach up to the moon.
Now some stars. In bead looming, my night skies often have dots for the stars, but this moon was so big that I felt they needed to be bigger, too. I didn't have any cabs that would have worked, though, so I went with more circles (that's probably why people are reminded of Van Gogh's "Starry Night", but if you have a closer look, you see it's not really that similar and it was not my inspiration).
It was also fun to add the fringe. I still have tons of those dagger beads from when an old project fell through, and the color was perfect.

Then I was at the usual point, what kind of rope to use. Of course I thought of my beloved Herringbone, but neither the 4 bead nor the 6 bead rope appealed to me this time because the different blue tones had different sizes.
I remembered, though, that I had just got some faux suede ribbon and there were still a bunch of crimps from my early bead looming days, and indeed the braids looked much better.
Now I'm really happy how the whole piece turned out! 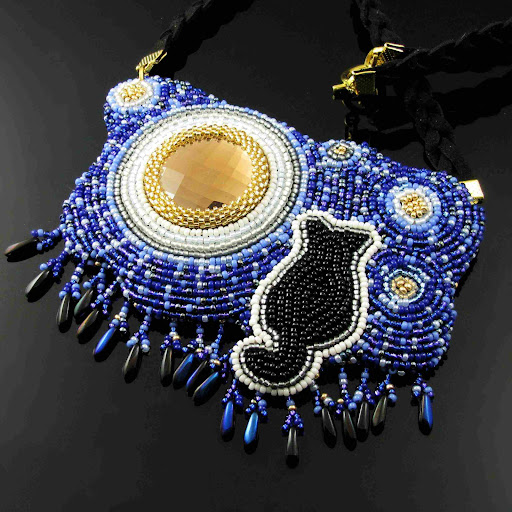 And the braids actually brought me to a WIP that has spent nine months in my infamous WIP drawer - my mermaid.
I hadn't even posted about her here because I thought she would be done much earlier, but I had had the same problem with the rope. Bead loomed strips didn't sit right, the Herringbone ropes didn't look right.

Luckily the other spools of faux suede that I got were a dark teal and a light blue which went perfectly with the colors I used in the mermaid's tail.
Actually, the first idea had been to make just a fish tail with all those sequins, but a tail by itself always looks so cut off, so instead this large mermaid started evolving, getting more and more hair and this big fish tail. It was fun ;-)

It's amazing how satisfying it is to finish a long time WIP because the right idea has finally come along and I'm very glad she made it out of that drawer that has proved to be the end of the line for some other pieces over the years.