... and it has a big nose.
Before you judge my poor lady, let me tell you that I seem to have a thing for big noses. When drawing a face, the nose was always on the big side, when I played around with polymer clay faces, the nose was always big, and obviously I have the same tendency with needle felted faces.

Also you mustn't forget that this is my first attempt at needle felting a human head.
After staying away from my felting stuff (and my bead loom) since der Dekan moved in as a crazy kitten, I finally had this urge to stab something and release some of the feelings that have been building up over the last months. It's hard to stay happy and positive with everything that's going on in the world most of which influences everyone in one or the other way.
I'm not a violent person, but stabbing roving can help to calm down even if I know people who say the sound makes them crazy instead of calm. My cats don't seem to mind and der Dekan only tried a few times to steal my roving at first which was really not a surprise.

Back to the head.
Actually, it didn't even start out like a head, but like a big face cabochon, with a flat back. Then I added roving to turn it into a kind of wind creature, with full cheeks, blowing lips and all. The "wind hair" was so wild, however, that I tried to tame it at least a little and suddenly I had this parted hair with a little chignon on top. That looked very weird with the flat back, so I added more hair.
Just two sleeping cats next to me snoring softly, the sound of a needle poking into roving, and David Suchet as Poirot for the only background noise in the middle of the night was surprisingly calming.
So I kept adding colors - which I'm not very good at yet, also it made the nose even bigger - and finally something to put the head on (I was thinking feather boa, you may choose what you like) because it was obvious that it would never get a body.

To me the lady looks like an aging diva, a character actress, no doubt, who watches her old movies in her private home cinema - wait, we already had that in "Sunset Blvd." or the Columbo episode "Forgotten Lady", only those ladies didn't have quite as grandmotherly hairstyles ... but hey, maybe she was an early star on the stage, not the silver screen, and maybe she would have made a nice protagonist in an episode of "Alfred Hitchcock presents"? 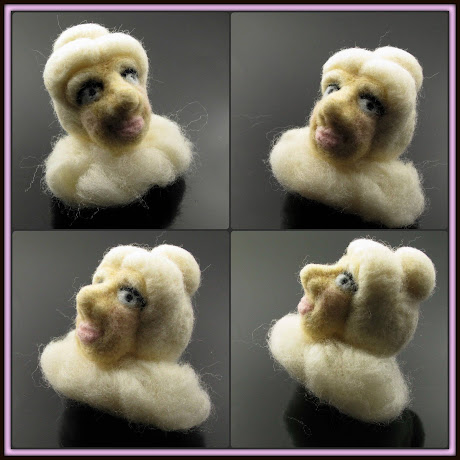 Anyhow, if I ever get better at faces, I'll be sure to let you know ;-)