A homage to needles

You probably don't remember Hannah Needle, my employee of the month in October 2020? She helped me with my HeatherCat sneakers and you can tell she was determined.
Actually I haven't been able to part with her, somehow she's a symbol of endurance to me even if I don't see that she will ever work again. 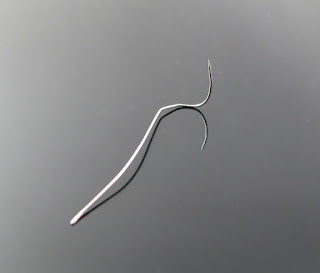 Others were not so lucky. I broke quite a few needles during my work on the sneakers and threw them out although I have to admit that I always did it saying thank you and sorry.
You think that's weird? Maybe. I'm not the only one, however, trying to express my feelings to inanimate objects that have served me well (or curse at others that are trying hard to annoy me!).
Have you ever heard of Hari Kuyō? It's a Japanese festival held for old needles, in some parts of the country on February 8, in others on December 8. It honors the Shinto deity Awashima no kami. People - mostly professional, but also hobby sewers - come to the temple to bury their needles. They give thanks and pray for becoming better at sewing in the future. The needles are placed in a piece of tofu or konnyaku jelly and sent on their last journey. The thought behind is that objects also have a soul and deserve such respect.

I had never really given needles much more thought beyond saying sorry, where and how they were produced and how many different kinds, lengths, and sizes there are.
Of course I had heard of the early beginnings of needles in the Neolithic times, made from bone, but that was about it.
I'm not going to go through needle history now, others have done that before and certainly much better than I could.
For example, I stumbled upon a German article in the 2018 annual of "netzwerk mode textil" (= "network fashion textile") about needle production in Aachen. I hadn't been aware that Aachen had been an important hub for high quality needle production, so much that they even got their own greeting from that, the "Klenkes", a stretched out little finger reminding of the way bad needles were sorted out by way of rolling them across the little finger to see if they were straight or not.

Now how did I find that article in the first place?
I had gone to eBay to look for beading needles and somehow ended up looking at vintage needles. My collector's heart fell in love with this cute pack of "Frauennadeln" (not even an inch!), literally translated "women's needles", a term that I had of course never heard before.
There are only two needles left in this pack, but look how pretty they are with their tiny golden ends! Yes, sorry, that's what collectors sound like, even if they haven't started a collection (yet). 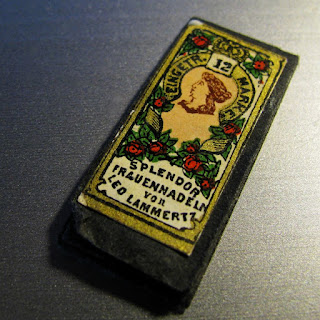 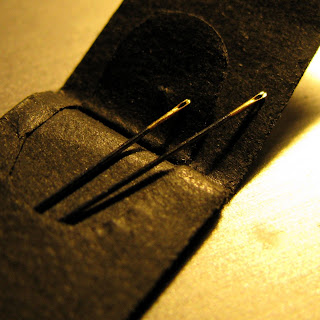 When looking up the term, I found the article which also had an explanation for me.
"Frauennadeln" are used by dressmakers for sewing fine fabrics as apposed to "Männernadeln" ("men's needles") which are preferred by tailors for thicker fabrics, such as wool for example.
In English the long "Frauennadeln" are called "sharps" and the short "Männernadeln" are "blunts" which of course refers to the point of the needle. There is also a length between that and guess what, they are called "betweens" while in German they are just called "halblang" = "half long".
Long and fine needles with little expansion at the eye that are used in millinery or bead embroidery are called "straws" or millinery needles. I guess I won't have to explain what "darners" are. When was the last time you have darned a sock?
Last but not least, there are a lot of other needles, for upholstery or leather, sewing machine needles, also fixing or safety pins and special needles in medicine or - for us oldies ;-) - used in record players.

Of course I had also never heard of the Lammertz company, but learned from the article that Lammertz needles are treasured by their owners because of their good quality and that the shock was huge among professionals when Lammertz stopped production in 2003.

Today there are only two companies left in Europe that produce high end needles. One of them is John James, situated near London in Redditch, a name that is probably very familiar to beaders, the other one is Bohin in France which barely escaped the end in the early 2000s and now has a modern museum which keeps the history and techniques of needle making alive.

Here are some more needle packs that I got, and I have to confess that I just got another pack on eBay and submitted an offer for another one. They don't take up much space and rest comfortably between my Steiff animals.
I'll add the pictures for the other ones to this post when I get them. 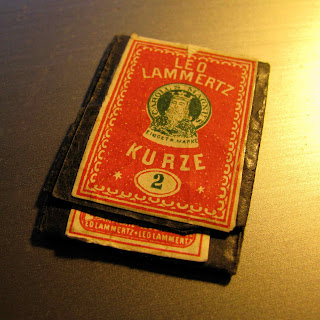 This pack included in the lot doesn't have a nice picture, but Jecker was also one of the old companies with tradition. 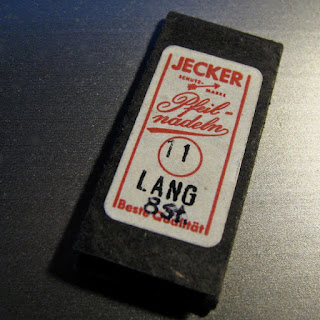 If you sew, no matter if by hand or with the machine, you may want to take a closer look at your needles. Maybe you already have, though.
I'd love to hear your stories!

And here are the two needle packs now that I got on eBay.
Both of them still hold a bunch needles, so I can always claim that's why I got them ;-)

The first ones are DOSCO needles, made by DOSCO Dossmann u. Co. Nadelfabrik Iserlohn in Westfalen. Except for Dossmann buying up the needle company of one of his neighbors and competitors, I couldn't find out anything about them. 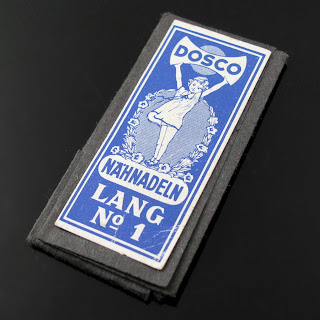 I'm still trying to find out more about this tiny pack (like the Lammertz Splendor pack it's not even an inch) of Princess Victoria sharps in a size 12.
Browsing for vintage sewing needles, I have come across several Victoria packs with different pictures of Victoria.
If the name refers to an actual Princess Victoria, such as Queen Victoria's daughter or the daughter of Edward VII., remained as unclear to me as the manufacturer of the needles before they were marked PRYM (a brand that still exists today and sells Victoria needles in a combination from size 3 to 7, not in these little paper packs anymore, though, and also not silver or gold eyed anymore to "protect the environment").
Possibly the manufacturer intended them mainly for the British market and therefore used the name. On the other hand, the Queen's daughter, did become the German Empress, so who knows?

As for the differences:
Some labels are all English, some are all German (saying Prinzess instead of Princess and using the German terms for the needles, such as Frauennadeln), some are in English and German using the word "Prinzess" and "feinste", but the term "sharps", for example.
I even found a picture on eBay UK with an Italian label!

There are those without a country of origin, but also some that specify it, "Germany", "Made in Germany", "M.i W. Germany, Imp. Allemagne OCC" (those were by PRYM again), but also "Made in Czechoslovakia" or - in another example by PRYM - "Made in the Czech Republic".

Some labels look very vintage with a blurry print and much more detail, those marked PRYM, but not only them, look very modern with clear lines.

I guess these Victoria needles alone could make up a whole new collection! 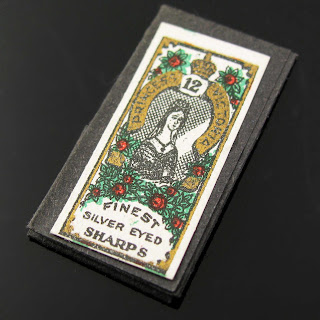 Update August 1, 2022: here is my latest acquisition. Actually it's not just one needle pack, but three looking the same, and there's absolutely nothing I can say about them, except that the label designer seems to have been a fan of Greek mythology seeing that there are Hephaistos and Hermes at the top.
I did find a label with lightning - the needles were made by the Georg Printz company and called "lightning needles", but held by a hand, not by an eagle (?). It also beats me who the two gentlemen at the bottom are and what the medal in the center is trying to tell us. 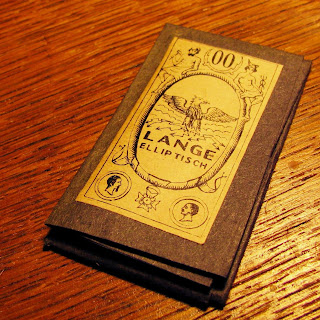