A new year - a new technique

Actually this wouldn't be a new technique for me if I right away had followed the whole tutorial I once got from Yoola Design, but you know me, being playful and impatient I don't deal with tutorials well and this has nothing at all to do with the tutorial itself, just me *inhaling deeply* That had to be said first.


Maybe it just came at the wrong time for me, though.
Now someone suggested the subject "New techniques" for the year's first blogring of my jewelry team on the Jewelry Artisans Community (no names will be told) and I had to think of something. It's not as if there isn't anything on my list, but none of it would fall into the urgent category, so I was pretty much at a loss at first.
Then I remembered this technique, though. I have seen it described as wire crochet (it's different from the wire crochet I have done so far) or as wire knitting. The finished product looks like a knit piece to me, but you can't grip the wire well with knitting needles, a crochet hook works much better. It also reminds on working on a knitting spool, just without the spool, and you can't just make tubes, but also flat pieces.
Actually that is what I have been making, bracelets and a necklace. This year has only just begun, I have time to try different items, I hope.
Let me show you what I have so far.
This was my first attempt. You can tell by the irregularity of the stitches. I had planned to make a simple bracelet without any extras, but I couldn't stop myself, so instead I made a long strip of wire whose edges I then crocheted together so that I could fill the bracelet with small beads.
This bracelet is by no means perfect, but I learned a lot from it already and I'll keep the design in mind.

My second attempt called for a slightly thicker wire and beads. What a nice coincidence it was that I still had the blue seed beads on the dark blue wire. Yes, this was certainly getting addictive as it turned out so nicely. 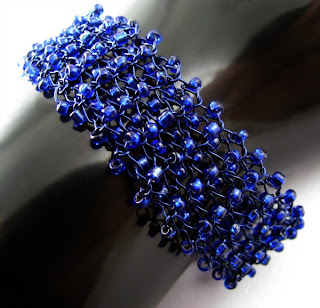 Now I started wondering if it would also work with bigger beads. A while ago I had gotten myself a few tubes of large Miyuki cubes not even knowing what I wanted to use them for.
I chose the silver-lined clear cubes and teamed them up with black wire. I wasn't all that happy about the cubes along the edges, though. It was ok, but round beads would have looked better ... or maybe no beads at all? 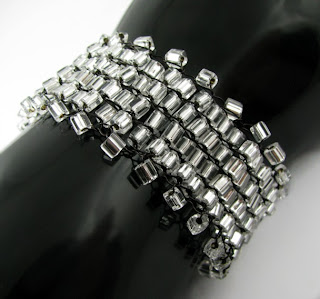 This took me to my next piece and this time I decided to really dig in. Bright red Miyuki cubes and clear AB finish Swarovski crystals ... bling, bling, bling. Believe me, these pictures might give you a vague idea, but they can't show the sparkle. What I like a lot is also how the cubes give the cuff a nice weight and still leave it slinky.

You know how I always seek to use up my stash? Well, here we go. Hm, more cubes. I really have to go and look for some round beads next, huh? 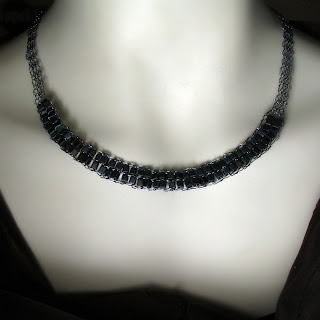 I'm not the only one in my team trying out a new technique. Please also visit:
Jewelry Art by Dawn
Bead Sophisticate
Oh, and by the way, I just had a new idea for cuff #3. I still have those blue cubes somewhere ... stay tuned!
Eingestellt von Cat um 10:59 AM