I have shown you this winged creature before, my all time favorite among my friend Heather's paintings. It makes me think of Ponder and I love it so much. 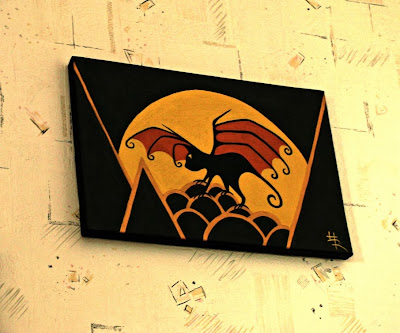 It also inspired the different winged cats that I made over the years. They had wire wings in copper or silver, but after discovering bead embroidery and sequins which is easier on my hands than wire at the moment, I have fallen in love with making wings like that. I guess it was just a matter of time for a cat with bat wings to materialize.

This black cat bead came to me with a problem. The tail curling up in front was mostly missing, it looked as if it had just snapped off. I couldn't get myself to throw it away, but also didn't have an idea for it for a long time.
However, after making the Demon Guardians, bat winged skull earrings, I looked at my black cats and thought that would be perfect for them, but I would try it out with the flawed bead first.

When glueing him to the backing, I noticed a fine line across his neck, at the top of the horizontal hole. Uh-oh. Was this what I thought it was? Yup, just a tiny tug and the head broke off.
I still wasn't prepared to throw it away, though.
I glued him thoroughly, even filling the bead hole which I didn't really need with glue.  Then I made him a "fuzzy" little bat body to hide the missing tail and making him sit on the backing even more safely by sewing through the hardened glue in the bead hole.

Next were the wings.
I chose shiny black and black AB sequins for them. I had to make them smaller than I would have usually done because I hadn't left enough backing on one side, an all too familiar mistake of mine, but it's nice to have a challenge ;-)
Last I added some matte black firepolished crystals - which I had also used to cover the bead holes - at the loops for the chain and to the black crystal drop dangle.
What kind of chain or rope I will use, I haven't decided yet.

So here he is, Mister Cat Bat.
I think it was a pretty good save. Of course he won't be for sale, but I'll happily wear him myself. 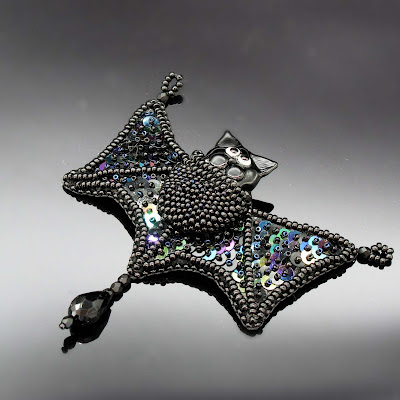 Inspired by him, I made a vampire cat necklace (with bigger wings ;-)).
Meet Count Catula who will be flying across the seas soon. 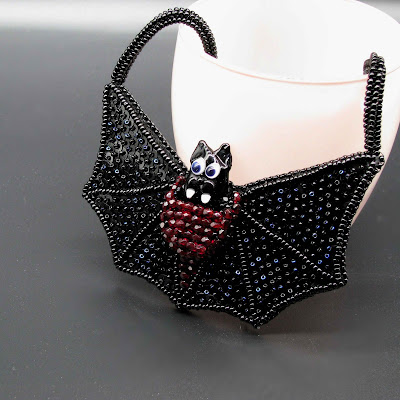 These bat cats are totally fabulous! Great save with the broken bead. No one could tell he’d ever been broken.