When I order beads, I sometimes throw something into the cart spontaneously, not even because I think it's drop dead gorgeous or because it immediately gave me an idea although that happens as well of course.
Actually it's meant to be a challenge for myself, and as I never know if I'll be up to the challenge, those are often sale items or small baggies.
A while ago I added four red resin roses to my cart. Four sounded like a small enough number for me to manage.

What I don't like much about bead embroidery is just glueing a cab on without giving it an extra bezel to keep it there safely. Blame that on my complicated relationship with glue. If I use a bead, I like to sew through the bead holes and immediately feel better about it.
Obviously a bezel didn't work for the roses and there were no holes, either, so I just have to trust the glue to be as sticky for them as it is for my hands.

Red always makes me think of black, and black and red together always make me think vampires and gothic vibes, so it wasn't a surprise that I chose black seed beads and matte black firepolished crystals along with the roses.
I tried around for a while, but finally found that I liked the flat background best. I couldn't resist adding skulls. I picked the grey instead of the black ones that I have because they sparkle a little more.
Voilà, my "Gothic Roses"! 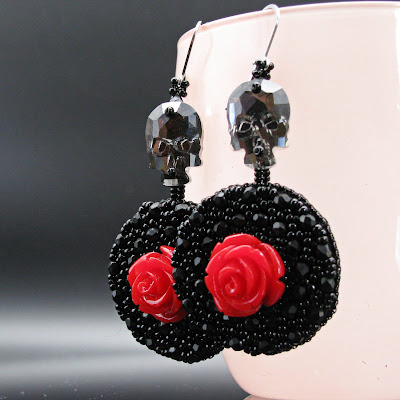 A few days later, I thought about making another pair right away, not dark this time, but light and sparkly. I would have liked to make the exact same design, but the only other firepolished crystals that I had in the right size were purple/blue which definitely didn't work with red.
What I found instead were some crystal rondelles that I had bought at the craft department of a local shop for their sparkle - magpie alarm! ;-) They were in my drawer for years, but now their time had come.
Luckily I also still have some of the crystal AB skulls and don't they fit perfectly for my "Ice Roses"? 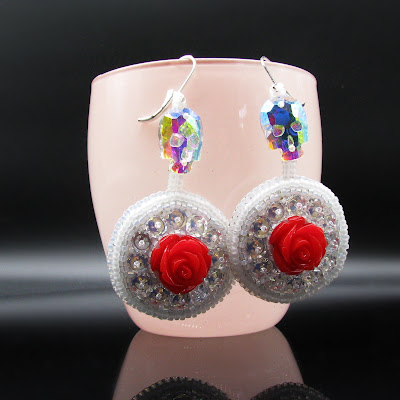 If you want to see the sparkle even better, you can check out my very small YouTube channel which I only have because I seem to be unable to convert the videos from my old camera, so not just the sound will upload on my Instagram.
I'm such a technology freak sometimes ;-)

I love these earrings, Cat! The skulls are perfect touch. (I need to play with the skulls you gave me!) And I feel you on the glue. I never trust it either, but sometimes you gotta.

I'm so looking forward to seeing what you will be doing with the skulls! I thought mine would be in the drawer forever, but luckily I was wrong this time, lol.
Thank you so much, Michelle.