It has been 1 1/2 years since my last nostalgia post, then again I didn't blog much at all in that time.
Today, however, one of my little Steiff teddies told me a story. It seems he went for an adventure and found a large (compared to him) vending machine for chocolate and bonbons in the middle of nowhere!
Unfortunately, the machine was empty and little Teddy was quite disappointed. On the other hand, he had to admit that he hadn't any money on him, anyway, so how sorry would he have been if there had been chocolate but no way to get to it! 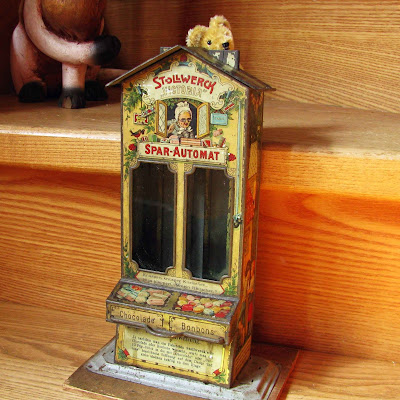 Let's take a closer look at this vending machine that Teddy found.
It's the "Victoria Spar-Automat" of the company Stollwerck.
Stollwerck, a manufacturer of chocolate, cocoa, and candy, was the first company to put up vending machines in Germany in 1887. Inspired by their great success, Stollwerck decided to have miniature versions of them produced after 1890 to teach children how to save and to give them an "incentive to diligence". The machines were produced by the company of Friedrich Anton Reiche which was also known for making chocolate molds (very collectible today).

How does the machine work?
"Victoria" has two chambers that could be filled up with sample boxes of "Chocolade" and "Bonbons".
The house has two chimneys aka coin slots, and depending on the chimney you put the 10 Pfennig coin in, you got chocolate or candy when pulling out the drawer.
The text says (in German it rhymes): "Save your money, my dear child, throw it in here quickly, everything you save is kept here for you."
The front also says: "Nibbledydee, nibbledyday, what is rattling into my little house?" which of course refers to the coins. 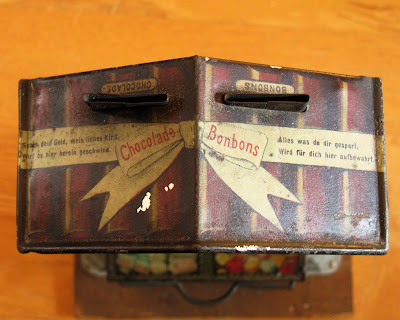 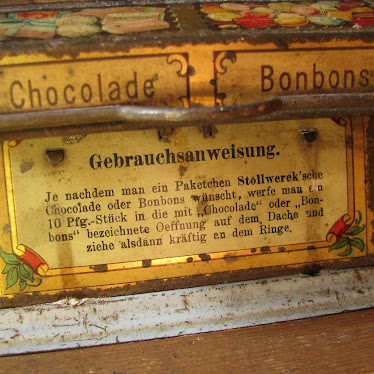 To refill the machine and get your saved money back out, you could unlock it on the side with a little key to allow you to lift off the back and roof.
I wonder how many parents refilled it themselves and how many let the children spend part of their savings on the refills to teach them the value of money.

From the above quote, you can easily tell that the machine is telling us the tale of Hansel and Gretel, with a little twist, however.
You can also see that Teddy has still been very careful not to get himself into trouble! 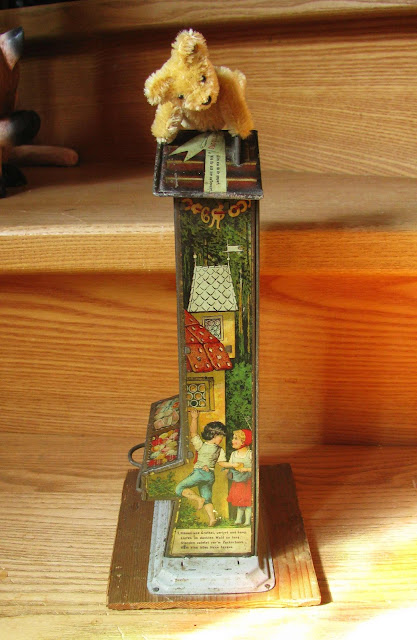 1. "Hansel and Grethel, lost and frightened, walked so long in the dark forest, finally stood in front of the sugar house, a wicked witch came out."

2. "The witch grabbed the children small, put them into the stable, bared her teeth and rejoiced, said: this will be a feast for me." 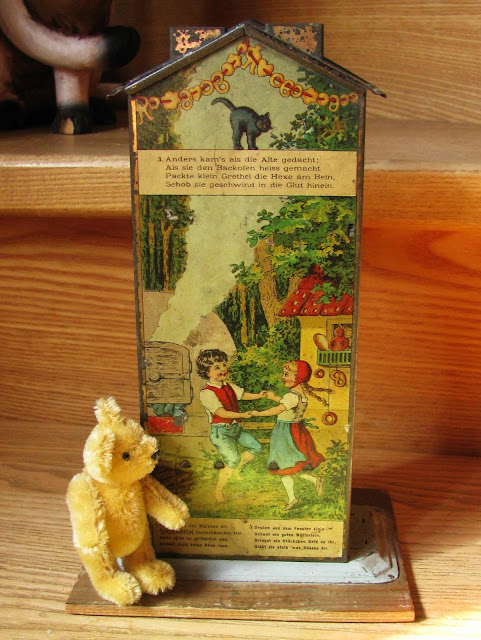 3. "It turned out differently than the old woman thought; when she heated up the oven, little Grethel grabbed the witch by the leg and quickly pushed her into the embers."

We know the tale that far, but now comes the Stollwerck twist.

4. "That's what the fairy tale tells you, Stollwerck sugar house here doesn't look so dangerous, no witch is looking out, either."

5. "A good old lady is looking out of the window, if you bring her a piece of money, she will always give you something sweet."


There's one of these machines in our local museum which I had been in love with since I was a small kid.
"Victoria" was produced around 1900 and is a desired collectible, but mine is missing the red bottom stand and has been attached to a metal/wood plate instead which made it affordable enough for me to have my dream of owning her come true.
Now if only Teddy could get his dream of "Chocolade" and "Bonbons" fulfilled, too ...