Khepri was the god of the morning sun in ancient Egypt. He was believed to push the new-born sun across the sky in the shape of a scarab the way real scarab beetles roll balls of dung from which their young emerge.
Khepri was depicted either as a god with a human figure and a scarab face or simply the scarab itself.
This is of course only the short version of his story.

When I put a little sodalite cabochon on my backing, nothing could have been more far from my mind than Khepri. It had been supposed to be a little in between project, a small cab on a small piece of leftover backing, with a bezel and maybe some edging for a pendant or part of a ring.
My plans changed rather quickly, though, when I had chosen a combination of blue and gold for the bezel and added tiny golden beads which turned the humble sodalite in a kind of scarab.

It was then when I remembered the winged scarab and went to look for some beads that would work for the wings.
I don't often use bugles, but have some choice in different colors from ordering surprise or destash lots.
After exchanging the backing because my piece was much to small for the new idea, I had to decide how to shape the wings and if I wanted to add the morning sun. Just in time I remembered having red magnesite around which would work perfectly for the sun.
When I had finished scarab and sun, I chose colors for the wings that reminded me of ancient Egypt, turquoise - shiny and matte with an AB finish - gold and purple.

The result was not at all what I had expected when randomly picking the sodalite from my stash.
Next - pendant or necklace? A bail seemed wrong, so it had to be a necklace, and if you have seen my last necklaces, you will have noticed that I love Herringbone ropes for my focal pieces. In this case, I added some dumortierite beads - for lack of lapislazuli.
I'm really happy with how this piece has turned out in the end! 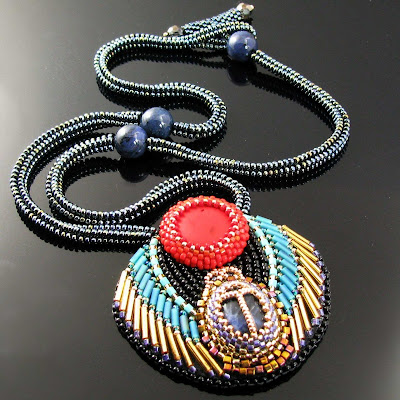