Welcome back!
In this post I want to talk about the accessories for Miss Francie Bennet - the 60s doll who has been thrown back into Regency times.

As always I had no definite idea which accessories I would make when I started this project.
Of course I knew Francie would need a pompadour, almost all of my dolls get some kind of purse or tote or handbag, except the first two Flappers.
She would also need a hat, that was the part I was afraid of the most because I had no clue how to make a Regency bonnet.
And for going out a shawl would be nice.
That was as far as I planned ahead.

As my big JaLa loom is still occupied by a WIP that I'm not sure about anymore, I decided to use one of my small looms for the shawl. After some quick measuring I figured it would be just big enough for the triangle shape I had in my mind.
It was close, very, very close. In fact I wouldn't have been able to finish the shawl if I hadn't opted for the triangle because I almost ran out of warp space at the bottom.
What I also had not taken into account was that glass beads are heavy and loomed items very slinky. The shawl slid off Francie's arms at the slightest movement, so I had to put in a few stitches to secure it. 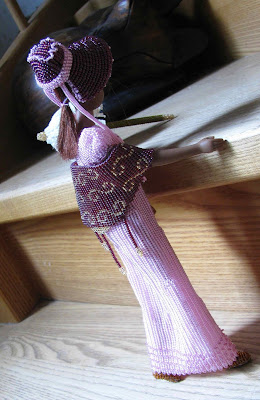 Then I suddenly had the idea to give her a parapluie, obviously because I believe in punishing myself.
My test piece was bead embroidered, but the shape reminded me of cocktail umbrellas, so I had the idea to make strips in Herringbone instead, sew them together and, well, wing it from there.
The little parapluie has nine strips which I sewed together on the inside and extra at the ends to emphasize the seams. A little hole which I wanted to use for the shaft remained at the top. So far, so good, but of course this construction wasn't completely firm. I took a deep breath and put glue all over the outside and inside to reinforce it. That sounds easier than it was, of course it got a little messy. Glue and I - the endless story.
In the end, however, I had a nice firm structure, yay!
I added fringe all around and finally the shaft (for which I beaded around a wooden skewer like for the Fairy Queen's staff) with a golden end top and handle. Voilà.
Francie can't hold this parapluie because she can't grip it and she can't bend her arms, so the plan is to either just put it in front of her or maybe add a strap, so it can dangle from her hand. 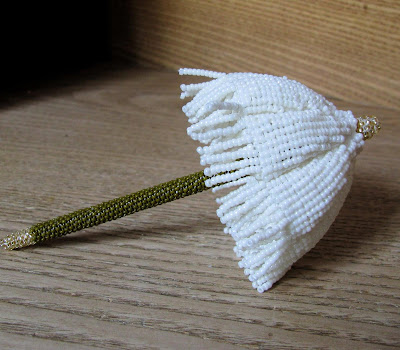 After this exhausting part of the project I needed to make something small, Francie's pompadour.
There's not much to say about that, you have seen variations of it before. 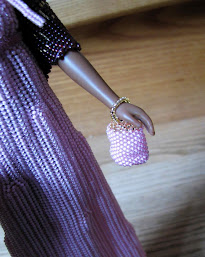 I had saved the biggest challenge for last - the bonnet.
Two things were clear. It had to be built up from several parts, and to make it sturdy enough, it had to be bead embroidery.
I looked at all kinds of Regency bonnets and explanations. Of course soft crowned ones were out of the question for me as I don't know anything about embroidering on fabric, it had to be the stove pipe kind.

Then I tried to keep everything that I had seen in mind and cut and bead embroidered three of the parts, sewed them together and glued on the Ultrasuede afterwards. This is a very short description for what took me a few days with the sewing and glueing being most difficult.
I also added some wire to the front part which helps to shape it, well hidden under the Ultrasuede.

The fourth part was even harder to deal with because I had to embroider it first and then glue it to the "stove pipe" as it would have been impossible to do that from the inside. There was no way to hold the glued edges together, it would have needed tons of pins to keep the shape. So I had to manage with my fingers and finally it stuck on the way it was supposed to. After it had dried, I added some pink lace on the back which also served to support the glued edges.

The last task was to sew on two rows of lace at the front, a ribbon around the stove pipe piece - again, as an embellishment and to secure the glued parts - and the ribbons to tie under the chin if wanted.
That too sounds a lot easier than it was. I tried several variations for the lace and the ribbons until I was happy.
Now I may have to make a little hat pin to make sure the bonnet will always sit well.

All in all it took me about three days to make the bonnet and I don't see myself making another one very soon! ;-) 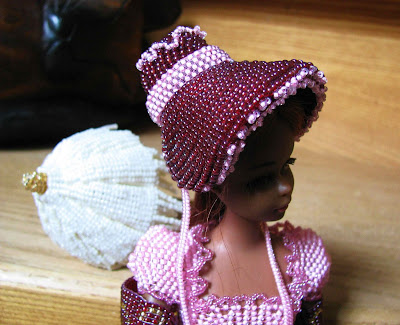 And now here's Francie in all her beaded glory.
It was a fun project, a frustrating project at times, it took patience, fantasy and, I'll be honest, some cursing, too.
There were moments when I thought I wouldn't be able to finish it, but now I'm very happy that I pulled it through! 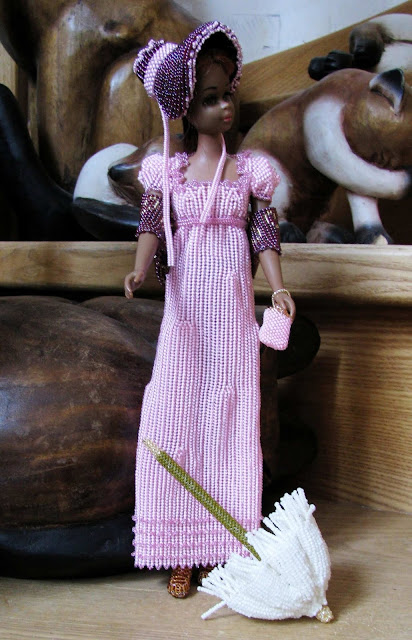 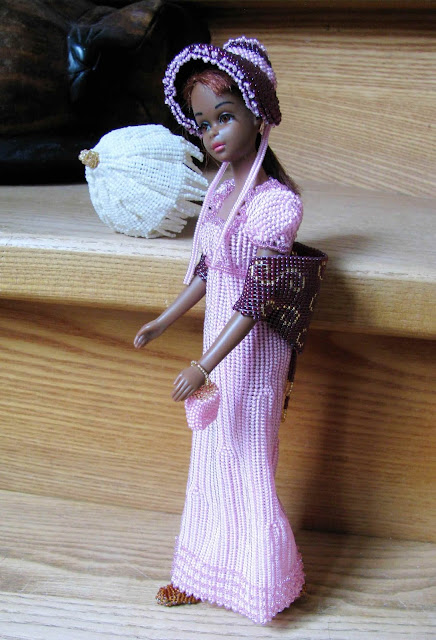 Francie is a registered trademark of Mattel, Inc. I am not affiliated with Mattel in any way.
Eingestellt von Cat um 9:00 AM

Cat, I think this is one of your best dolls yet. Or, perhaps saying it is one of my favorites would be more accurate. I love everything about Miss Francie. Her beaded gown is exquisite, but it's the small accessories that really fascinate me. The details in the shawl, the purse, the bonnet (Wow!) and her parasol simply blow my mind. I can imagine how much patience it took to complete those tiny things, and all I can say is that once again, you have amazed and awed me with your talent and creativity!

Thank you so much, Dawn.
I'm really ridiculously proud of her, especially the bonnet. I have been watching period dramas again this weekend and found myself having a very close look at all the different bonnets and accesssories and fashion!
I think she was more difficult because it's not completely a fantasy outfit that I could simply adapt during making which is why I'm happy that I made it work the best I could.