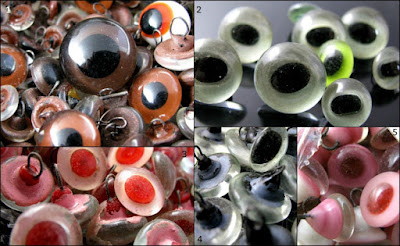 Last year I used this collage in one of my nostalgia posts about a Steiff King Charles dog, a tin full of vintage glass eyes for plush animals, and a shoe company.
These are just a few of the eyes in that tin, and since my collection has pretty much reached its limits, I doubt that many new eye patients will turn up who need them.

A few days ago I had an idea what I could do with at least some of them.
As you can tell from the picture, the eyes don't all look the same. Most of them are not flat in the back, but have a little (or not so little in case of the pink/red eyes on the bottom right) bump for the wire. I also think it might help the eyes better to sit in the plush animal's eye sockets.
I can only use the flat ones and I have been wondering if there is a way to make the others flat, but for now I chose a pair of old brown eyes of which I have several. After all I don't want to use eyes for jewelry and then need them for a patient eventually.

Some of the eyes are made from colored glass, but the really old ones, like the ones I have used, have a black glass pupil in clear glass and are painted on the back to give the eye its color. Many of these vintage ones have lost some paint which is a pity. Of course you can repaint them yourself, but I'd rather use a damaged one because to me they have a special charm.
They have to be flat if you want to use them in bead embroidery.
In this case, I glued them onto the backing very carefully because of the paint and then let my muse guide me - from the bezels that give the iris some extra shine to the white of the eyes for which I used three sizes of beads all around the iris to give it that wide eyed look, the black around the yes and the "lashes" of silver coated dagger beads only at the bottom edge.
It makes me wonder what they see! 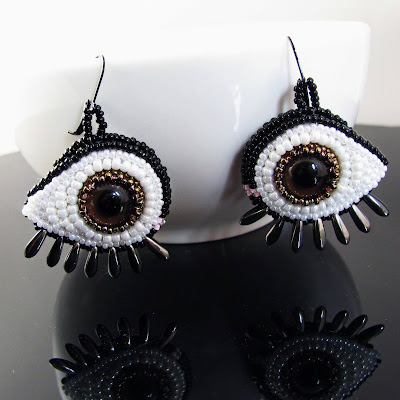