The hedgehog that almost got away

Yesterday I made another little hedgehog (in fact another one today, one of them will be a gift). As I have run out of the gunmetal wire that I used to use for the quills, but still have a big spool of brown wire from when I thought I wanted to crochet a tree (turned out I didn't after all), I wanted to try that for the quills.

Shortly after I got a surprise visit and showed the hedgehog. That was the last time I saw it. We are talking about 3.2 cm or 1 1/4 inch here, not something that you see easily.
I searched everywhere. Usually my desk drawer is a temporary stop for pieces, so I won't lose them before the description is written, pictures taken, etc., but not this time.
Although it didn't make any sense, I dug down to the bottom. Why would I not put it on top if I wanted to take pictures next?
I went on to check shelves, the cabinet next to me, I even looked in the fridge! I called my visitor to ask if she had accidentally taken it home.

Of course friends of mine whom I whined at were convinced that the guilty party was rather small himself, furry, striped and very quick. I have to admit that part of me thought the same thing. Der Dekan has a really hard time keeping his thieving paws off stuff lying around unguarded. Only the hedgehog wasn't unguarded at all, I really thought two people would have noticed a cat stealing something right from under our noses. He's never subtle about it, more like "Yahoo! Got it and now I'm going to kick it around like crazy and then hide it where you have to crawl in to retrieve it!"
No, I was pretty sure it had been my own stupidity.

This morning I called my visitor to tell her that I had still not been successful. We contemplated a few more possible spots when my eye fell on the cup/saucer/plate that she had brought me (and which you will hear more about in a nostalgia post eventually, sorry). Maybe I had put the hedgehog in the cup when I put it in the other cabinet (not the one I had checked)??
Nope. Not in the cup, not on the saucer, not on the plate .... but it was happily sitting right next to it!
You have no idea how relieved I was. I would have found him there maybe in a few days, weeks or months, but this was much better for my sanity!

And here are both of them together now. Is it me or is there a smug look on their faces?
Der Dekan got compensated for having been suspected, by the way. His feelings were very hurt, he thinks he's the most innocent cat in the whole world, maybe even galaxy. Oh boy. 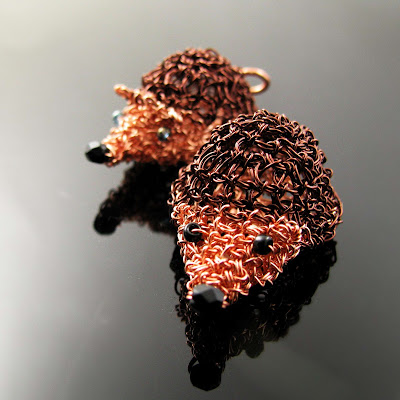