Nostalgia - What are we out of today?

Today's post is about a metal sign we once found at a fleamarket.
It says "Was fehlt uns heute?" which means "What are we out of today?" and then there's an alphabetical list of things you need in the household.
I don't use it, it's merely decorative although I didn't make an effort to clean it up. 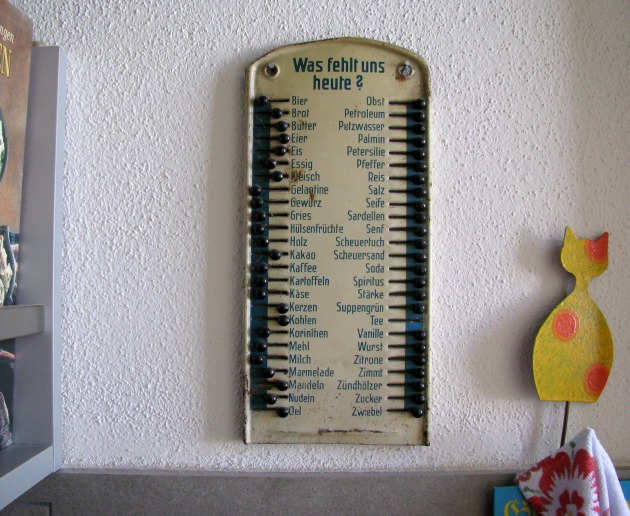 Here's a translation:
Beer, bread, butter, eggs, ice (which could mean both ice for an ice box or ice cream, but my guess would be ice for the ice box in this case), vinegar, meat, gelatine, spice (it doesn't specify which spice is meant), semolina, pulses, wood, cacao, coffee, potatos, cheese, candles, coal, currants, flour, milk, jam (in German the word marmalade is often used for jam although it's not the same), almonds, noodles, oil, fruit, petroleum, cleaning water (that is a literal translation, my guess is they meant cleaning powder etc. for use with water), Palmin (which is the name of a German brand of coconut fat that exists since 1894), parsley, pepper, rice, salt, soap, anchovies, mustard, floor cloth, scouring powder, soda, ethyl alcohol, starch, mirepoix or "soup greens" (in Germany you can buy bundles of certain vegetables that are used for aroma in soup or gravy, like parsley, carrots, leek, onions, celery root etc.), tea, vanilla, sausage, lemon, cinnamon, matches, sugar, onion.
I think the list is rather interesting because it gives you an idea of what items were important in those times.

These kind of signs seem to have come with kitchen cupboards, at least I've seen a few pictures of that. They were attached on the inside of the doors, so if you put something into your cupboard or took something out, you could move the little sliders - one of whose is missing in my sign, so tea is out forever! ;-) - to give you an idea how much you still had left of that particular item.

I would have loved to find out the history of these signs, but all I could find was there were different versions, I even found a modern one. Believe me, if I had the room I would probably start collecting all the different ones I could get my hands on!

Later signs for example had a different text "What's missing in the household?", they are often marked "E. Kosta", a company I couldn't find anything out about, either.

Some signs have a shorter list with a few different items like pearl barley, honey, shoe polish, laundry detergent, and lard - like this one from the Museum Wolmirstedt. 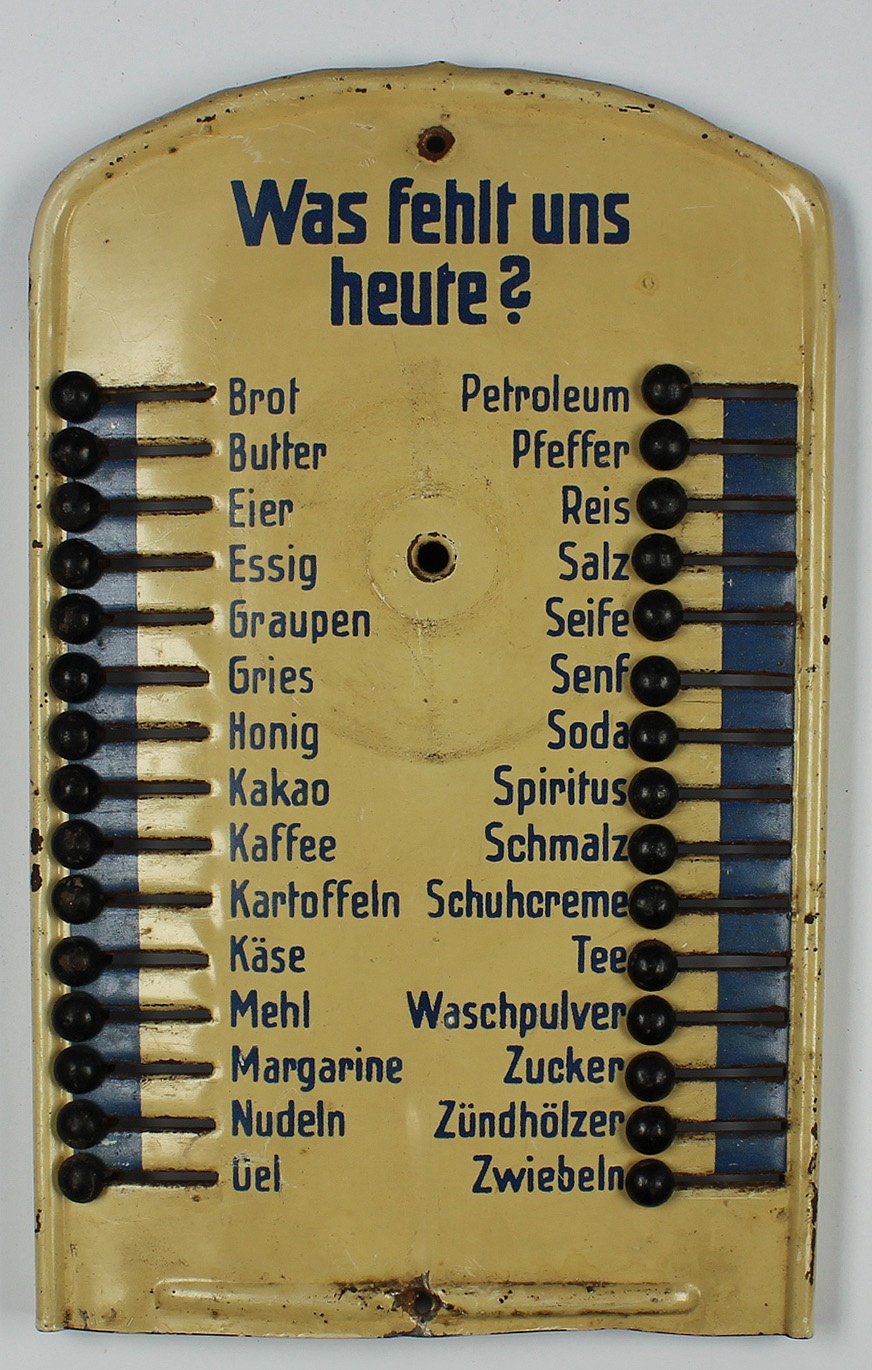 Others list maccaroni and custard or baking powder. Some have white on cream print instead of a dark teal. The sliders don't always look the same, either.

Some list different brands like Ata and iMi, scouring powder and laundry detergent, which were first manufactured in 1920 and 1929.
That made me wonder if those signs had also used to be made by certain companies to advertise their own brands or if those brands were just so well known that their names were used to represent the kind of item like it is still done today, calling all tissues a Kleenex for example.

Also interesting is the spelling. In my sign "Gries" (semolina) and "Zimmt" (cinnamon) are spelled differently from today (Grieß, Zimt).
It also lists a word used very often although it's wrong which would be "Gelantine" for gelatine.
In 1901 an Orthographic Conference was held at Berlin with the aim to standardize German spelling. That didn't mean, however, that the now wrong spelling wasn't used anymore until many years later, you know how people are.
So this is not proof for my sign being older than 1901, but it's definitely younger than 1894 which we know thanks to Palmin being listed. I would think it's from the 1910/20s.