In early November, I have told you why I have been missing from my blog for a while. One of the reasons was der Dekan, my kitten. He has grown to be a little less demonic, but of course still needs a lot of attention, so the only way to get creative is to shut him out or wait until he is very tired and then be prepared for that moment.
If I'm working on something, it can take me a few hours, and at this point, I would really feel bad about locking myself in for that long leaving the little demon outside waiting, especially since Gundel has demanded alone time of her own for some hours of undisturbed sleep. So I tried for the sleep mode time instead. It turned out that I'm never prepared because, well, I never know what I'm going to need when going on a creative adventure. Standing up, however, means that der Dekan is going from sleep mode to "let's play, throw that ball, can I attack you, no, don't pet me, here's the ball back, look what I found, can we play some more" mode.
Of course it's not just a matter of attention. Der Dekan is obsessed with my beads and thread and wire, just as any kitten would be, and he's so fast that I don't trust him around my stuff unless I can tell he's too tired to move. This is a matter of safety, that of the beads, but much more his own.

Yesterday, though, the unthinkable happened. Not only did der Dekan decide to give me hours to play by passing out cold next to me in a way only cats can do it, but I had everything I needed.
It was great. I hadn't even known how much I had missed my beads and the calming effect that playing with them has on me. I have been quite stressed out lately and while beading doesn't make the stress appear, it gave me a much needed timeout.
Not knowing at all where a design will be going can mess things up if you get stuck, but seeing something finished and not having the slightest idea where that design has come from is what I love most about being creative.

This lady started out with a carved face glued to a piece of Lacy's Stiff Stuff and a peyote bezel. This particular transparent dark red with AB finish has become a huge favorite of mine, especially in a combination with the metallic bronze.
I think my first idea was to give her hair, but with the red bezel all around her face it turned into some kind of embellished headdress instead that reminded me of an Elizabethan hairstyle which probably inspired the collar like part which led to the sequins - in a different color in order to add a bit more depth to the design - and pearls in the end.
Is she a little over the top? She sure is, but I guess she - and I ;-) - needed that! 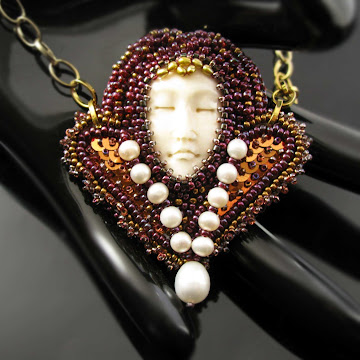 Oh wow! She is absolutely beautiful!

Thank you so much, Star!