Finds of the week - and memories of Fips 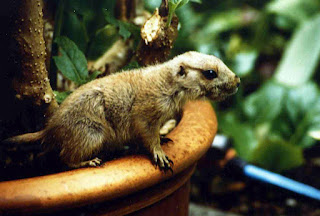 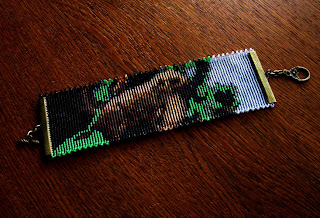 Then I decided to dedicate today's finds of the weeks to a very special little critter.

Laurie Ryan is bringing this not so happy looking fellow to you.

My absolute favorite is this print by Anthony Falbo, though. I keep coming back to it because it's so hilarious and I really love it.


And now two pet peeves of mine ... meerkats are NOT the same as prairie dogs and prairie dogs do NOT bark! Thank you ;-)
Eingestellt von Cat um 1:48 PM

I remember one of the first times I was working at our local zoo. Frida, the lady in charge of the food station, handed me a plate with meat and told me to take it to the raccoon. "Don't put it outside. She has babies and stays in her hut most of the time, so put it in there." I was a newbie, and I figured if she gave me that task, it wouldn't be too difficult. Go in, put the plate in the hut, go back out.
Yeah, well, not. I can't say I had had any raccoon experience before that, and although I was well aware of animals protecting their young against potential enemies, I hadn't expected the kind of growling coming out of the hut when I approached it. This was some serious momma. So I kneeled in front of that hut, only seeing a pair of eyes glaring at me, and, I have to admit it, I was scared to death with the thought of putting my hand in there. I have no idea how long I stood there with that plate in my hand ... and I can't even remember if I finally managed to put it in there or if I asked someone else to do it.
Not one of my more laudable actions, I'm afraid.

I'm not the only one who has a strained relationship with raccoons (although I'm happy to say that we found to better terms once I was more experienced).
Seems Polish rabbis in the 19th century who were sent to the USA had the same problem - one moment he's holding a raccoon in his sleep (not knowing it), the next moment ...

In the heat of the night

I wish I was just talking about the movie with Sidney Poitier (and could tell you a funny family story that comes with it), but actually it is  /$%"/$"/$ hot here and I can't sleep.
Instead I went through my UFO baggie that I put together after I organized my beads and found one of my wire knit bracelets that was only missing a clasp.
When I opened the storage drawer with the clasps, the big leafs fell into my hands, not everyone's cup of tea in a bracelet because of their size, but what if ... I could ... there was the chain ... that doesn't look too bad, but maybe the other one ...

So this is what I finally got. Not too bad for a fried brain in the middle of the night, is it?
It's available in my shop now. 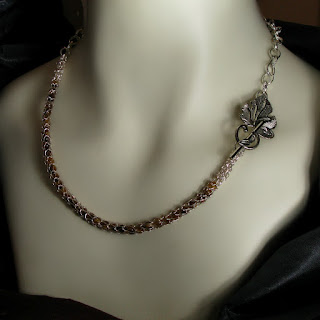 Finds of the week

I'm sitting here and craving pizza. I have two possibilities. I order some from the place across the street, wolf it down with a high possibility of getting a grease stain right on the front of my t-shirt or I try to take my mind off it with the help of

- the pizza scarf by Runee 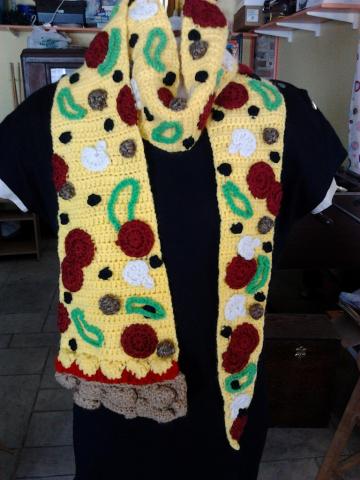 - the pizza earrings by Legally Beautiful by Naiv

There are series that decidedly run for too long (no matter if TV or books or even movies). It feels as if you chew on a gum that has lost its taste two hours ago.
There are on the other hand series that didn't run long enough, in my humble opinion. There's a quite funny discussion about that on IMDB about this for the sitcom I chose for today's quote.

I have been on vacation to the UK a few times. Strangely I have never experienced anything - or anyone - remotely similar at a hotel ;-)
Meet Basil, the "friendly" hotel owner, and his wife Sybil getting reading for a weekend away.

Sybil: Aren't you going to wear that jacket, are you?
Basil: Yes, I am, thank you, dear, yes.
Sybil: Just haven't a clue, have you?
Basil: You wouldn't understand, dear. It's called style. 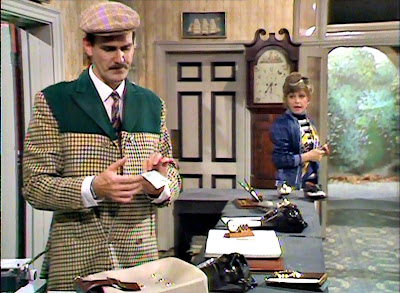 I'm really tired, so let me just show you the latest and I'll be back out like a lightning, ok?

I'm still in love with the combination of color-lined crystal and galvanized seed beads. The optical illusion that makes you think you have a textured 3D piece is stunning, no matter how often I work with it. I'm really happy I stumbled upon this because it's so much fun.
This new slim bracelet is made with galvanized rose gold and yellow-lined crystal beads, such a sunny, yet also earthy combination!
It's available in my Zibbet shop.

Totally different is this necklace which is not listed yet. I'm very tempted to keep it myself, only this light blue is not necessarily my color.
Pure sparkle, I swear. It's definitely droolworthy.

I'm only glad I got my very own "dragon" taking care of the hoard and protecting it! ;-)
Boy, he looks mean in this pic!! I really need to try and get back into gear with this blogging thing.
Today's quote is dedicated to my very own alien. Greetings to Badenz V! ;-)

And now imagine your husband has died - and suddenly he's standing before you, only it's not him, it's a being from outer space that cloned his body.
Then the alien wants a ride to the place where his people will pick him up.
Quite a journey ... especially if you let the alien drive and you just missed a hay truck by so much.

It's Mother's Day on Sunday, so this is this month's blog carnival subject.
Well. Hm.
There's not really much I can say about Mother's Day. My mother wasn't particularly keen on this day. Maybe it was because she got tired of having to look for lots of little glasses for the bundles of daisies we plucked - it was so easy to get carried away on that big meadow near the woods.
Or maybe she just thought she was a mother 365 days a year and not just on a Sunday in May.

I can't remember if we ever prepared breakfast for her or if we drew special Mother's Day pictures for her (I've been told we did).
I can say however that we try to show her she's important to us throughout the year, but it's probably never enough. 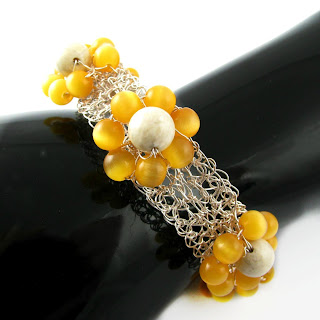 Check out the other posts of JAC members, too!

We didn't have those for a while, did we?

Let's make it short however.
I baked. You might think this is not exactly a big achievement, but knowing me ... well, it is. I'm amazed and stunned by myself, so much actually that I can almost ignore the knuckle I burnt in my usual klutzy way. It's not bad, it doesn't really show, it just hurts to remind me I'm a klutz.

What do I care? I got something to show and to eat, and mind you, even if I'm saying it myself, they are good, my "Seelen" which is what these bread rolls are called. It translates to "souls". 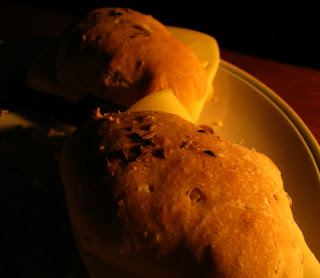 It's not the only thing I achieved in the last days. I won't bore you with stories of grocery shopping and folding laundry, but just show you the good stuff.
Do you remember the Gingham fabric pattern I made? With the beads that didn't want to play nice?
Well, I made two other patterns and am about to finish a more cooperative Gingham cuff. I'm having way too much fun with these.

This one is listed already - Houndstooth I 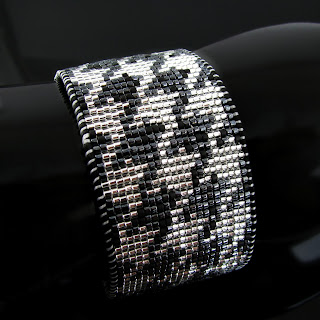 I took most of the pictures for this one and already edited them, I just need one more shot of the snaps, but you know how it is - Argyle (I love this one and would love to see it in different color combinations) 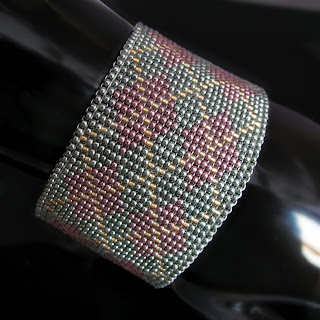 And of course a bad sneak peek pic of my Gingham WIP. 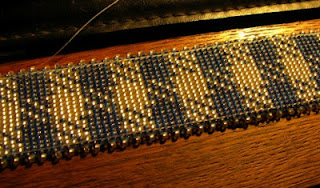 I know it sounds a bit as if I entered the Cave of Caerbannog and read the inscription before some of us will unfortunately get eaten by the Black Beast, but this is just me yelling in deep frustration.
Life has been having big fun with me lately which is actually no fun for me at all, but really .... there's a line. It's enough now.

Look at this.
A ten inch fall on a wooden floor and now this. Was that really necessary? What will be next? With my luck the Black Beast might wait for me in my kitchen. 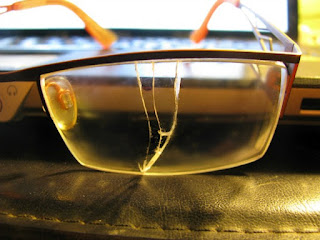 P.S. Don't be surprised about the glass looking so foggy. It was so dirty that I decided to use the "wrinkle remover" on it. The whole thing is embarrassing enough as it is ;-)
P.P.S. You don't get the Caerbannog thing? Go and watch Monty Python. It's an order!
Eingestellt von Cat um 9:06 PM

If I'm peeking in, I think I should give you something to peek at as well.
To distract myself I have been looming like crazy. Counting beads and making patterns are perfect brain stoppers, for me at least.

Let me show you my latest.
It does help to know Monty Python to understand what that is. And no, the red is not cabbage.