On top of the hill

Agate Hill is in the middle of nowhere, so nowhere that no one even really knows where that is.
It's not a big hill and there's not much to see, just some stones and a few trees over which the moon and stars shine in the night sky. Of course there also the three houses.
No one knows who is living in the three houses, either. No one noticed how they got built and who built them. They were suddenly there with their icy looking walls and bright red roofs. Sometimes you can hear sounds that make you wonder what's going on there. Gnome workshops? Some of Santa's elves exploring new territory?
Not one has been brave enough yet to knock and say hello ... would you? 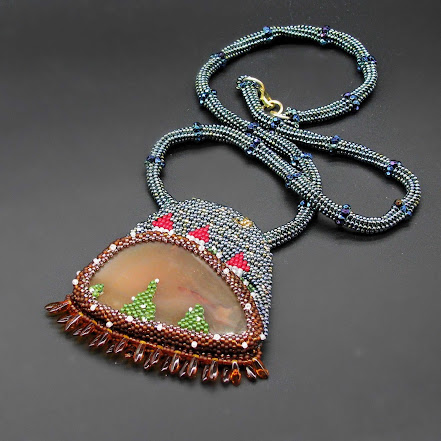 Actually that's pretty much how it happened.
The houses were suddenly there. Everything was suddenly there. All I had done was glue the agate "hill" to the backing and bead a bezel for it. The rest was magic. Or my muse. My magic muse?

Every, now and then I wonder if it's a good thing to work like that or if I should challenge myself to plan something, with sketches or a list of what colors I want to use, for example.
On the other hand, those are the pieces that are the most fun to make. Sometimes I'm sorry if I have limited myself by using a piece of backing that isn't big enough for the thoughts in my head. Then again, however, it can be really exciting to take on the challenge if the right idea suddenly pops into your mind.

When the focal was finished (with black faux leather on the back, by the way), I went through my beads for inspiration. The dagger beads had just the right color and luckily I had just ordered the blue crystals that I used in the rope.

Now I only need to find out who lives in those houses.