Usually I start a stash tackler by going through my stash to see if anything is talking to me.
This time I started with a leftover piece of bead embroidery foundation. When I made my little hedgehog (that I didn't blog about, but you can also find it in my gallery), I didn't know at first what it would be become and how big it would be. Well, not very big as it turned out, so I had a piece of foundation with a hole in the middle and no idea what to do with it - until I cut it in half and ended up with two quite weird shapes.

I took one of them to my cab drawer to see if I had one that was right in size and would give me a good idea when a small rhodonite donut jumped into the way - not the slightest idea how this ever got to me - and thus turned on the experimenting mode.

This was a rather interesting journey. The first steps were easy. I glued the donut on, then I looked for bezel colors. Funnily enough, I had matte seed beads that matched the color of the rhodonite almost perfectly. They came from one of the surprise bead mixes that I like to order, and until now I had been pretty sure I would not be able to use them anytime soon. Does the bead store know my stash better than I do? ;-)
Now what colors to use with them?
I wanted a bit of color and a bit of shine (my way to say that I love to use metallic accents). Was it coincidence that most of the colors I picked were already waiting in my work area? And was it coincidence that I had just found the dark red fire polished crystals again? Of which one fit perfectly into the hole of the donut?
This was almost getting a little spooky!

From there, I was just following the flow. I had cut the edges of the foundation randomly, now I needed to fit a pattern into that.
After doing a few swirls I noticed that I was reminded of clothes patterns from the mod era, almost a little psychedelic, although those clothes would probably have been a lot more colorful.

In the end, the focal needed a chain, and there was really only one way to attach it.
I struggled a bit with the temptation to add a drop dangle to the tip (which isn't really a tip, it's just an illusion thanks to the crystal, the back looks more like a member of the Barbapapa family ;-)) or a fringe from tiny seed beads or fine chain, but then it seemed to me that would have been too much. 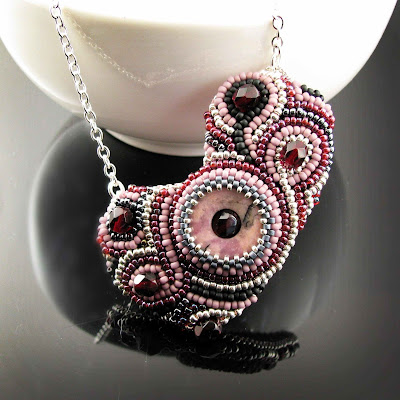 This was a fun experiment. Maybe I should try this more often, after all I still have the second half to begin with. I'll let you know how it goes.
Eingestellt von Cat um 9:00 AM

I love this! The colors, the asymmetry, the way you used the donut.

Thank you, Michelle!
It's nice if a piece is a surprise even for yourself :-D